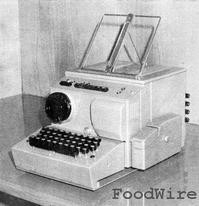 Another day, another brewpub for St. Louis: Six Row Brewing Company is now open at 3690 Forest Park Avenue. The address was once part of the Falstaff brewery, giving this new venture a direct connection to St. Louis' brewing history. Six Row currently has six beer styles: a Kölsch, a porter, an ESB, an extra pale ale, a honey wheat and its own "Whale" beer. According to its website, Six Row plans to offer a limited menu of pizza and pretzels in the near future. For more information, call 314-531-5600.