The Novice Foodie is Full of Crêpe 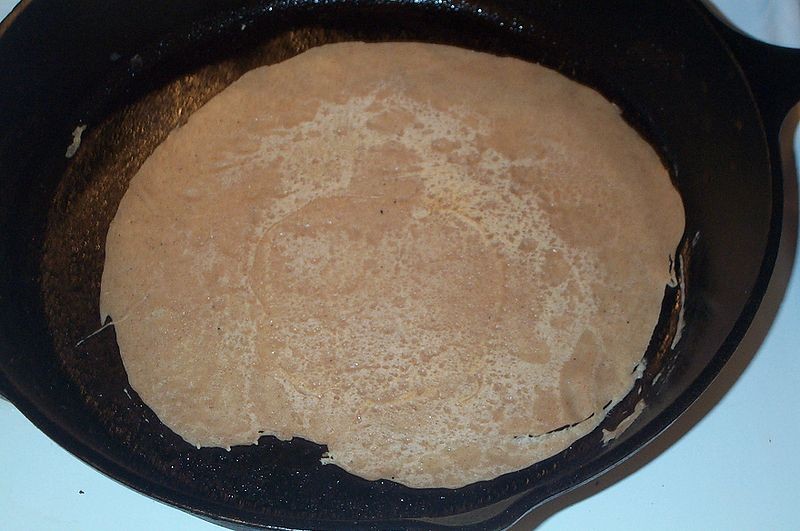 Encouraged by last week's no-knead bread success, and bloated from several Thanksgiving dinners, this week I decide to tackle another classic while keeping things light.

When I want crêpes, I usually go to Rooster or Murdoch Perk, but I'd like to be able to make them at home because they're lighter than pancakes, whichI often make for breakfast-for-dinner. Since pancakes usually leave me feeling like I got kicked in the gut, I'm on the lookout for another sweet treat that can be made for almost any meal. Crêpes fit the bill.

Crêpes exist in many forms in many cultures' cuisines, but in my mind, they're all French. I slapped on a beret, pulled out my copy of Mastering the Art of French Cooking -- might as well start there -- and found the recipe for Pâte à Crêpes. There was a sweet crepe recipe, too, back in the dessert section. However, it called for orange liqueur, rum or brandy. Quelle horreur! We had none of these boozy selections, only sweet tea vodka, vermouth and wine. None seemed like suitable substitutes, so I went with the savory crêpe recipe.

The recipe was quite simple: flour, milk, water, butter, eggs and a pinch of salt. One thing I've learned is not to let recipes with simple ingredients intimidate me: Even if the technique is difficult, it gives me a chance to learn that technique -- even if said technique is as simple as, you know, not producing a hockey puck when you set out to make a loaf of bread. Plus, using basic pantry ingredients means slightly less guilty when if I screw up.

Honestly, crêpes are so simple that the only way I could have screwed them up would be to burn them. Of course, crêpes take around a minute in a pan, including the flip, so I easily could have burned them.

The trick, for me, was to resist the urge to multitask while cooking. One thing I did to prevent this was to have a system set up before I started cooking the crêpes. I had my batter bowl and a covered plate right next to the stove, so I could easily transfer the crêpes when they were finished.

However, the next time I make crêpes, I will have a mise en place set up for my fillings so I won't be futzing around with them while trying to cook.

We kept it simple for breakfast: cinnamon sugar, Nutella, strawberry preserves and whipped cream. I know a mise would be even more vital if I wanted to do savory fillings like eggs and cheese, which I will undoubtedly pursue sometime in the immediate future.

FYI, I don't have a crêpe pan, and I don't need one. I used a regular old nonstick skillet, and it worked just fine. I didn't quite have the skills necessary to flip the crêpes with a mere flick of the wrist -- I had to use my fingers, but that wasn't hard, either. The lone casualty came from an overzealous flip; the victim fell on the floor.

I kicked the crêpes' asses. My husband loved them, and they were a welcome change from pancakes. Even better, they take the beloved breakfast-for-dinner concept a step further, because you can use almost any savory filling.

I dare you to try making them. I doubt you will be disappointed.