The Novice Foodie: No-Knead Bread, No Need for Dishcloths

I have made mention of my terrible baking skills before, noting my failure-in-triplicate to reproduce the infamous no-knead bread faithfully. Yet I am a sucker for punishment as well as crusty bread, so I dared myself to try just one more time to not completely screw up a recipe that only involves four ingredients and little complication. I mean, I was a little tired of hearing "Just try Bittman's recipe!" when I said I suck at baking. No, really, I messed that up three times.

There were a few things I identified from my previous attempts that might help me in my quest to succeed with no-knead bread. First, I had to pay attention to the time frame. No-knead bread requires an initial rising of at least twelve hours. (This is why you don't have to knead it -- time does the work.) Then there is a second rising of two hours. I needed to time when I made the dough so that I'd be around for the second rising and subsequent baking. This time, I made the dough at night, let it rise overnight and then completed the second rising in late morning. Working from home helped.

The second problem I have when baking is not measuring precisely. This time, I was as accurate as I could be, leveling off the measuring cups and spoons with a knife without shaking the contents. (If I were really a super-baker, I would have weighed my flour, the most accurate way to get a precise measurement. However, I don't own a food scale, so this wasn't an option.)

The third problem I've had in the past is possibly expired yeast. I had recently purchased yeast, so it wasn't a problem. With my suspicions of prior failure alleviated, I moved on with the dough.

Here, I encountered a problem (of course). Apparently, I forgot to sync our laundry schedule with my baking schedule, and I was all out of clean dishcloths. Rather than wait almost two hours to wash and dry dishcloths, I turned to my trusty supply of clean rags cut from old clothes and towels. I needed something smooth, without a nap -- no terry cloth. What fit the bill? Um, my husband's old boxer shorts. 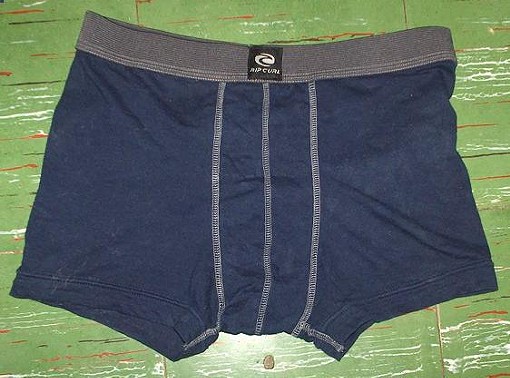 Let me say this again: I totally covered my bread dough with my husband's worn out, discarded (but clean!) underwear.

After the second rising, the dough wasn't as large as I had hoped, and I feared we were in for yet another disaster of dense, choking bread. But I soldiered on and poured the dough into the pre-warmed enameled cast-iron pot, baked, removed the lid and baked a little more. I tentatively opened the oven door at the scheduled time, fearing the worst, hoping for the best.

Victory, my friends. Victory is mine. The loaf was neither flat nor dense, but beautifully rounded and crusty. Artisan, if you're nasty. There's only one conclusion we can make, dear readers: My husband's underpants are magical.