On Saturday, October 31, and Sunday, November 1, Zach Dyer helped judge the Midwest Regional Barista Competition, with the winner advancing to the national competition in Anaheim in April 2010. In last week's post, Dyer explained how the competition works and described the drinks made by the finalists from PT's Coffee in Topeka, Kansas. This week, he looks at how the finalists from St. Louis' own Kaldi's Coffee Roasting Company fared...

Kaldi's baristas focused their presentations on the raw possibilities of espresso, deconstructing the coffee to show its versatility. Kaldi's roaster and (for the day) barista Joe Marrocco brought his perspective as a roaster to his signature drink. Using the Costa Rica Don Mayo currently served in Kaldi's stores, he prepared the same coffee roasted two different ways to highlight the differences. 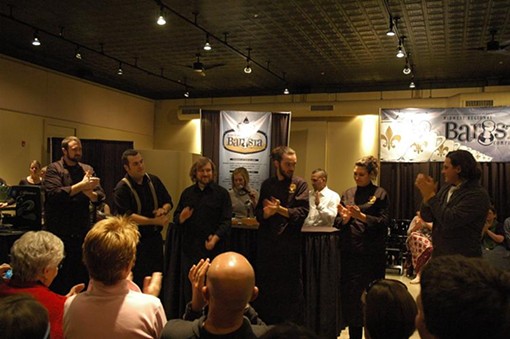 Micah Svejda focused on hiw three different brewing methods affect the flavors in coffee. Using the Costa Rican Helsar (also currently served in the cafes; try it on the Clover at the Clayton store), Svejda prepped the judges' palates with French-press coffee cooled to room temperature to highlight the coffee's sweetness. Then, he served the same coffee cold-brewed to accent its acidity. Finally, he served the coffee as espresso for its syrupy body. "You never really drink the same coffee twice."

Mike Marquard looked at the rising possibilities of varietals in coffee. Using the same Helsar as Svejda, he presented the vastly different flavors that come from different varietals of coffee grown in the same micro-region. Marquard took it a step further by comparing the typica and caturra single-origin varietals from the Helsar micro-mill in Costa Rica with some better-known varietals, Granny Smith and John Gold apples.

To marry the taste profiles of the espresso and apples, Marquard prepared a cider on stage to accompany the shots of caturra. A tiny Mokka pot sat on a gas burner, overflowing with chopped Granny Smith apples. Adding some dark brown sugar and Ceylon cinnamon, he turned up the heat and brewed a quick cider. Speaking to the tart acidity of the espresso and the caramel notes in the espresso, he described it as a "deconstructed caramel apple."

As a judge, I was lucky enough to try Marquard's signature drink Saturday before the finals. The bright, tart flavors in the espresso paired surprisingly well with the apple cider. While the caramel wasn't as present as I thought it might be, the pairing was a playful success. Other judges must have agreed: Marquard took first place and secured a spot in the national semi-finals this April in Anaheim, California.

One of the fan favorites, Marquard was a finalist last year and went on to place sixth at nationals. When asked what signature drink he would prepare for nationals, he said that he wasn't sure but was inspired by a recent trip to Colombia: "I'm thinking about doing some thing like, 'What side of the street do you live on?' We recently went to a small town in Colombia named Monserrate and the coffee grown in the same town but on opposite sides of the street had a completely different flavor."

It was a joke between the judges that unless the barista mentioned how "passionate" they were about coffee, they'd never get a good score. Passion sounds like a one-dimensional response to how you feel about something, but after reviewing the weekend in my mind, there's really no other way to describe it. The crowd at the competition was a mix of industry personalities -- the gregarious Nuova Simonelli representative's Italian accent was endearingly close to the Count's from Sesame Street -- coffee enthusiasts, barista supporters and even a coffee farm from El Salvador. A trio of coffee Smurfs (giddy volunteers donning the event's blue t-shirt) waited behind the curtains for the signal to clear discarded espresso and cappuccino cups.

Specialty coffee is a passionate industry. The excitement, friendship and dedication I saw were inspiring. Events like this help bring all of us closer to that perfect cup of coffee.

Zach Dyer is a writer living in Saint Louis. He did his thesis research on coffee farmers in Southern Mexico. Since then, he has visited coffee plantations in Costa Rica and Mexico as well as roasters and cafés across the U.S. He blogs about coffee every Wednesday.