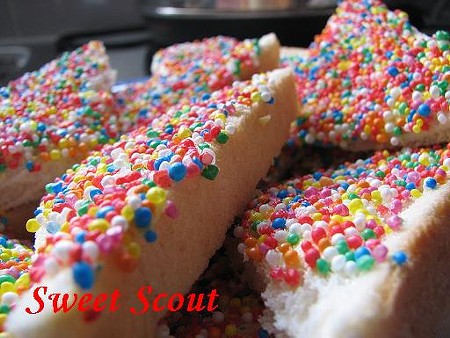 Gluten-free foods intrigue me. Why live without gluten? Celiac disease causes an intolerance to gluten, a protein found in wheat; those suffering from celiac disease can suffer numerous health problems if they ingest it. However, recent studies have shown that many who go without gluten aren't truly intolerant. Instead, they find they feel better not eating the heavily processed foods that often contain gluten.

My question: How do gluten-free foods actually taste?

Browsing through a local magazine, I spotted an ad for a gluten-free shop. After checking its website and seeing that it sells various gluten-free baked goods and meals -- who knew that gluten was a problem in teriyaki chicken? -- my husband and I headed over there to see what might be worth tasting.

My first testing was of the pecan pie (largest item, top right). Now, I love pecan pie. How could you not? It's nutty and gooey and sweet and buttery. Perfect, as far as I'm concerned. However, this version wasn't so great. It had an interestingly muted scent, which was sort of like pecan pie -- yet not, exactly. The crust was reasonably flaky, but it didn't taste much like standard crust.

My favorite part, the filling, was totally different from your usual pecan pie. There was no goo. It was crumbly, like a bunch of lightly-sugared pecans gathered together into a crust, and very gently sweet. Pecan pie should bitch-slap you with its pecany goodness, and this just didn't do that.

I decided to try a chocolate-chip cookie next. I was surprised by how good it was. There was hardly any scent at all, but otherwise it was indistinguishable from a "normal" chocolate-chip cookie. It was chewy but still kind of snappy and perfectly sweet, with nice chunks of chocolate. This was, by far, the best of the bunch. The last two items, a brownie and a lemon poppy seed muffin, didn't fare so well. The brownie was pleasantly thick, chocolatey and moist, but it had an aftertaste that did not sit well with me. Meanwhile, the muffin I must call a failure: not very lemony and seriously dry.

Of course, this was just one bakery. Are you living with a condition that makes you beg-off gluten or do you just like going without? Where do you find gluten-free baked goods that taste like their wheat-protein-filled counterparts? Your Sweet Scout would really like to know!

Adrienne Jones is a writer, photographer and world-class eater who blogs at A Girl and Her Camera. She loves desserts and has been known to take to a frosting tub with little more than a spoon and a well-tuned sweet tooth. She will report on her latest favorite treat every other Friday.