"It's like Iron Chef with baristas making coffee drinks."

"It brings people together to showcase their talents and come together with a community who want to raise the level of specialty coffee," Ferguson says.

The event, held at the Soulard Preservation Hall at 1921 South 9th Street, is free and open to the public. The competition starts Friday afternoon at 1 p.m. The event continues Saturday, with the finals Sunday. Twenty contestants will be in St. Louis to compete for the event's top honors. Winners go on to the 2010 national competition in Anaheim, California, in April. 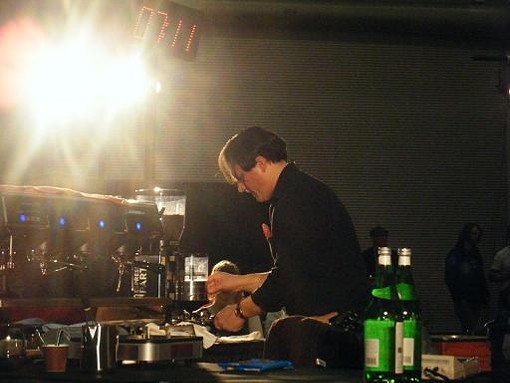 The competition provides each contestant with espresso machines, as each has to be calibrated to ensure an even playing field. The rest of the competition is "BYOB." Contestants usually bring their own grinders and their own coffee. The quality of the coffee is also judged in the competition.

Each contestant has fifteen minutes to make four espressos, four classic cappuccinos and four "signature drinks." The first two categories should be pretty obvious, but signature drink could be, well, almost anything. The drink has to contain at least one shot of espresso and must have a predominantly "coffee" taste to it.

"The idea is to pair unique ingredients with the coffee. The drinks are scored on creativity," Ferguson explains. In the 2009 competition, Kaldi's Mike Marquard's signature drink was a caramel tobacco smoked espresso. The signature presentations are closely in tune with recent trends in the coffee industry so that, as Ferguson describes it, "even veteran baristas will be pushing the envelope."

The Midwest region is relatively new to the barista-competition circuit. It's been in existence only since the early 2000s. When the organizers were able to generate enough interest, the Roasterie in Kansas City hosted the first competition. The last two years, Kaldi's has hosted the event at Soulard Preservation Hall.

The competition can be a good resource for baristas and roasters to try out new drinks, announce new roasts and get feedback from industry leaders. Kaldi's released its Espresso 700 blend at last year's competition. Some specialty drinks have made their way from the stage to the menus of local cafés.

Ferguson is hopeful that the competition will help stoke greater interest in specialty coffee in St. Louis. I've heard several times that Kansas City's coffee culture is more nuanced than St. Louis'. As a native St. Louisian, I find the thought of Kansas City having anything over us painful, but we might yet have something to learn from our sister city to the west.

I asked Ferguson if he was worried about bad weather keeping people away this year. "It couldn't be any worse than last year," he told me. "There were inches of snow on the ground." But I don't think weather will be an issue. What goes better with a drizzly cold day than a cup of coffee?

Zach Dyer is a writer living in Saint Louis. He did his thesis research on coffee farmers in Southern Mexico. Since then, he has visited coffee plantations in Costa Rica and Mexico as well as roasters and cafés across the U.S. He blogs about coffee every Wednesday.