Sneak of the Dead

Pay attention: In the event of a zombie apocalypse, the information I'm about to give you may be the difference between having your cranium cracked open like the sugar crust on a crème brûlée and parlaying a considerable stash of vodka and ammo into living the good life with a harem somewhere in Montana.

The safest place you can possibly be in the event that hell runs out of space and the dead walk the earth is in a movie theater. Let's discuss.

1. Limited Points of Ingress and Egress

There's usually a point in a zombie movie where the snacks...er...protagonists manage to barely escape the horde by running into a building and barricading the doors. There's just enough of a lull for you to think they might be safe for a while, then a zombie hand crashes through the window! And everyone is surprised!

Look, zombies may be mindless killing machines, but somewhere deep in the recesses of their virus- and voodoo-riddled brains, they remember that it is easier to get through closed windows that it is to get through closed doors. The movie theater, much like the shopping mall, is a superiorly defensible location because of its lack of windows. Why do you need windows after the zombie apocalypse? There's only two things you'll see if you look outside the theater: zombies or no zombies (indicating that they are hiding). Look, padlock all those helpfully highlighted exit doors and jack-knife a semi trailer in front of the ticket booths. You'll have plenty of room in the theater for storing supplies and even working plumbing for lots of people. Doors and windows are a liability.

So you have your theater sealed up as tight as a drum but still want to keep an eye on the undead menace? Head up to the roof. Unlike residences, movie theaters tend to have large, flat roofs with easy access from the theater itself. Not only can you safely get some air up there, it's a great place to collect potable rainwater in old popcorn tubs (provided the rain wasn't what zombified civilization in the first place). It also serves as a safe lookout post and place to signal other survivors. If you think there might still be some military air cover, you can arrange ripped-out theater seats into a message. Really, though, the roof comes to greatest advantage when combined with what's next on our list.

OK, visualize all the popcorn that gets made at a movie theater every day. Now, visualize the heating element that keeps it atomically hot. OK, now think about the 247 gallons of fake butter in the closet behind the snack bar. Good.

Now, using skills unknown to you before the undead armageddon, rig the popcorn heat lamp into a device that will boil the fake butter and drag it up to the roof. Uh huh. Now pour boiling fake butter on the zombies trying to get into the theater. This medieval favorite is still just as good a deterrent for those attempting siege, but is now even more fun because zombies don't die when hit: They just get some external damage and become very slippery. Since zombies tend to roam in ravening hordes, hitting just one of them is probably enough to butter up the whole group when they clamber over the top of him.

Here's a fun game to play with buttered-up zombies: brain fishing. Making space for humor and recreation are vital to your mental health and, thus, survival in the event of an uprising of the living dead. So take some of the leftover popcorn and stick it together with the Pepsi concentrate for the soda fountain. Form it into the shape of a human brain -- it should be fairly gray in color already. Now attach it to a length of film -- something you don't want to see, of course, like the last Terminator movie.

Now go up to the roof and have some fun! You can drop the brain to the ground and drag it along, just out of your target zombie's reach or lower it to head height in a group of them to make them jump and tear at each other in futile attempts to bite it out of the air. If you use something particularly sturdy as your line, like electrical cord, you can even hook one and haul it up so your partner gets a better chance to blast it with a shotgun. Really, there are so many applications for this after the dead outnumber the living.

If you're more interested in volume than flash when it comes to exterminating shambling corpse cannibal freaks, look no further than your own two feet. That sticky stuff on theater floors?* That is absolutely organic, which means you have the means at your disposal in the snack bar to make a giant zombie glue trap outside the theater. Plan it well enough and get a high zombie volume and you'll essentially have a fence of the suckers writhing around the perimeter and keeping others out.

* - Sneaks are not responsible for that.

4. Stadium Seating Is Perfect for Sniping

When theaters, especially large ones, go belly-up, they're difficult spaces to re-imagine. Just about anything but a movie theater moving into the space must require a huge amount of space and be willing to undertake massive renovations. Most end up as vaguely butter-smelling gyms. I've never understood why more haven't been opened as indoor paintball venues: multiple levels, including tiers just big enough for a single person to crouch down behind a seat and pop up as soon as she gets a shot? Delightful.

In the event that zombies actually breech your well-defended theater, don't give up hope. The ample cover of theater seating and natural strategic advantage of not being a zombie may yet give you the day. A human confederate may also be able to help you by seeing you from the projectionist's booth and blinding the zombies with a quick blast of the opening credits.

5. When in Doubt, Burn the Place Down

You remember Gremlins, so I know I don't have to explain this part. There's a reason you need to familiarize yourself with the exits in a theater before you get too into the movie. Unless you just happen to be holed up in an old revival house with a lot of film stock from the 1930s and '40s, the film itself won't be flammable, but the seat cushions, carpets and front curtains are probably all made out of synthetic fibers -- petroleum-based synthetic fibers. You don't even need extra gasoline. Just make sure everyone's got a way out and some idea of where to go before you lock the doors from the outside and torch that zombie cave. 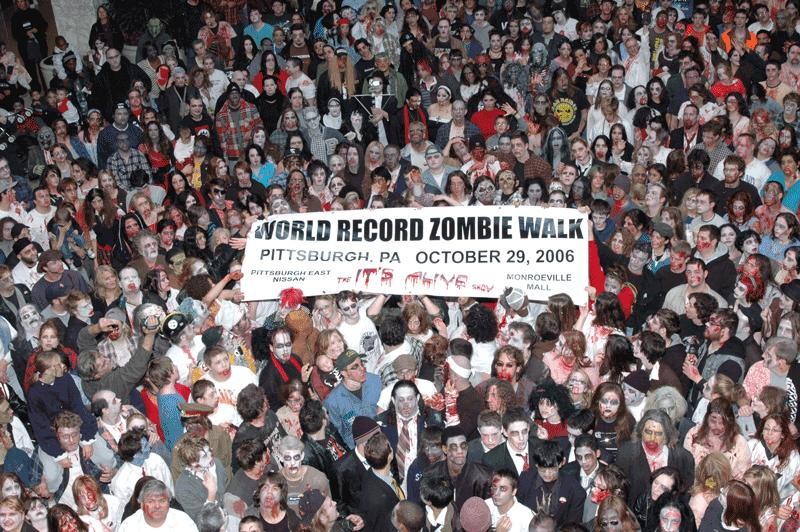 I could go on about the zombie-thwarting properties of movie theaters all day. Tragically, this obvious stronghold was overlooked in the delightfully gross horror comedy Zombieland in favor of two different set pieces: a Beverly Hills mansion and an amusement park that looks suspiciously like the one from Adventureland. I'm beginning to think that Jesse Eisenberg actually lives there, and any director who wants to shoot at the park is contractually obligated to cast him as a nebbishy virgin.

Zombieland is the zombie movie I would have written in a week of study halls when I was seventeen and been justifiably proud of penning. It is in no way subtle and includes a lot of overly-explanatory and arch narration, complete with graphics. Absolutely no loose ends are left at the end; if something got mentioned at any point, it's going to be resolved before the credits roll. The comic timing is good, but not quite grown up. Jokes are either taken a step further than they actually merit or not taken far enough to explore additional comic meanings. As a movie, it's a cartoon. But it's a damn fun cartoon.

The Doctor, my mysterious long-time gentleman caller and the man I'd always choose to have riding shotgun if I needed someone to fire an actual shotgun, pointed out how similar it was to Inglourious Basterds, which we saw together some time ago. In a way, he's definitely right. The two movies have the same DNA, but Zombieland is the kid brother digging through the box of E.C. Comics that Inglourious Basterds left behind when it moved for grad school. Both feature the violent, occasionally hilarious dispatch of culturally acceptable disposable people (zombies, Nazis), but while Basterds is holding up a mirror to the audience and daring them to examine why they're having so much fun, Zombieland is mugging in the glass to get its ironic eyebrow twitch just right.

Dara Strickland is a leading expert on sneaking food and drink into the movies. She reports on her exploits (from an undisclosed location) every Monday. Sometimes Tuesdays. Sneaks are sneaky that way.