The Dive Bomber: A Prayer for Mary's Blue Ribbon Lounge

Why do people go to bars? To unwind. Escape from life's troubles for a bit. Companionship and company. Oh, and alcohol -- though it's easier and cheaper to drink at home. It's those social aspects that get us out of our houses and into taverns, right?

I'm not sure that's the case with Mary's Blue Ribbon Lounge. For starters, I'm not 100% positive it's a commercial bar. I drove past the place twice before I noticed it because it's a house, surrounded by other houses. There's a slight possibility I wandered into the home of someone with a small collection of bar paraphernalia. Inside, there's dark wood paneling on the walls, doors with large "Keep Out" signs and notes on the two window-unit air conditioners threatening death to anyone who touched the dials. 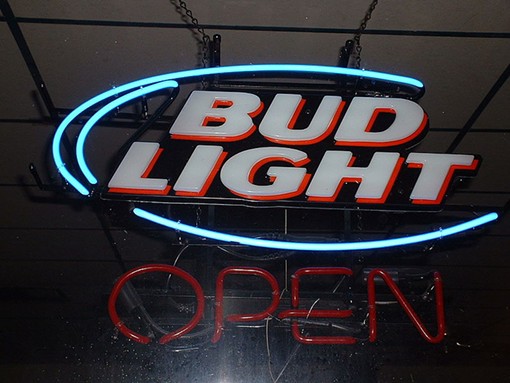 "If I wanted to drink canned beer I coulda stayed home," a man at the end of the bar complained. They were out of bottles of Bud Light. Not that this stopped the man from drinking several cans.

At the other end of the bar, a couple engaged in round after round of pool, arguing the entire time. "You scratched! Don't you lie to me! I saw it!" screeched the wife.

I try to be kind when I give my bar reports. It would be easy to simply make fun of people, but I try to approach those I encounter with love and compassion. But this woman ...she had a voice like grim death. High-pitched, nasal, and stuck in whine mode. And loud. Nearly capable of splintering wood paneling.

When I read A Prayer for Owen Meany, I longed to hear the main character's voice, described as loud, nasal, unchanging. All of his dialogue is uppercase. Appropriate, since he's an instrument of God.

I have now heard the voice, bellowing at her husband about the location of the eight ball. If that's the voice of God, any shred of faith I had is gone.

I drank one beer and fled. I couldn't take the arguing anymore.

I hope that couple went home and fucked like chimps on meth. That's the only thing that might restore my faith. That, and the bottles of Bell's Oktoberfest in my fridge at home.