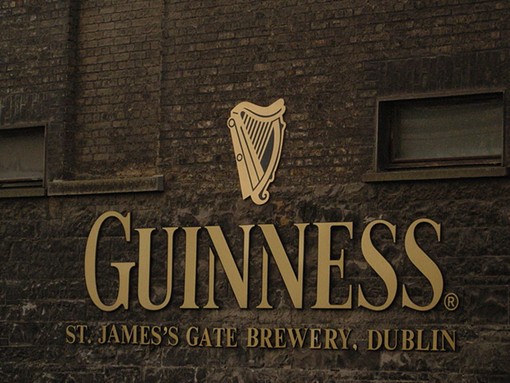 Today is the 250th birthday of Guinness, which ranks just below Bono's mullet as Ireland's greatest gift to the rest of the world.

Seriously, though, I love Guinness. In late 2006, when I reviewed the Dubliner, I penned a rambling tribute to Guinness, which rambling took me from Windsor, Ontario, to Dublin and beyond. Read it after the jump.

I ordered my first pint of Guinness in an Irish-themed pub in Windsor, Ontario. I must have said something about it being my first Guinness ever, because a guy seated nearby turned to me. He wanted to tell me three things.

First, I should pay close attention to how the bartender poured my Guinness. He should stop with the glass only three-fourths full and then wait two minutes -- ideally, he should walk away and take someone else's order -- before he finishes pouring. This, my new friend told me, was how you got a perfect cap of silky foam atop your Guinness. If the bartender failed this step, I should refuse the Guinness.

Second, once I had the pint of Guinness in front of me, I should take a penny -- a penny, he insisted, sliding one across the bar to me -- and tap it against the bulge near the top of the glass (it went without saying that a Guinness must be served in the proper glassware, as distinctive as a Coca-Cola bottle) and then against a spot near the bottom. Only when the penny made the same tone when struck against both places was the Guinness ready.

Finally, if I liked Guinness, I had to go to Ireland -- to Dublin, in fact -- to the St. James Gate Brewery itself. Guinness was immeasurably better closer to the source.

As a matter of fact, I was headed abroad later that year, and on my first day in Dublin, I dutifully visited the brewery. After a lame tour of a mock-up of the brewing process and a cool exhibit of Guinness advertising through the years, I went into the Guinness "pub," handed over my two drink tickets and received a pint of Guinness -- from the bottom of the keg.

Fortunately, over the following days I enjoyed many delicious pints of Guinness in pubs in Dublin, and I can report that it does taste better there (if maybe not immeasurably so), and if you, too, love Guinness, I'd recommend a visit -- except that it might spoil you for the rest of your Guinness-drinking life. You'll wander from pub to pub to pub wherever you live and travel, searching in vain for a pint of Guinness that perfect.