The Novice Foodie, on a (Maki) Roll

I'll admit: When I first started eating sushi, I only pretended to like it so I'd seem sophisticated. No, really. I wanted to look cool, and it's hard to look cool when you're forcing down oversized mouthfuls of raw fish. Luckily, I never got caught up in the lie, because on about my third attempt, my palate responded positively. I've been downing rolls and sashimi ever since.

So when my pal Kelly said she had an extra seat in a hands-on sushi and beer class she and Jerad Gardner were teaching at Kitchen Conservatory, I jumped at the opportunity and set off for cooking school. 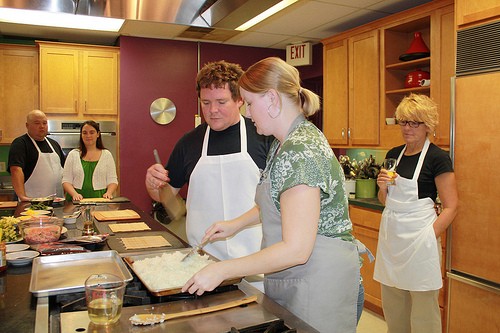 The last cooking class I had was probably in sixth grade home ec when we made cinnamon muffins before sewing potholders and after learning about laundry cycles. I wasn't sure what to expect at Kitchen Conservatory, but the atmosphere was casual and relaxed, and it helped that my friends were the instructors. Kelly explained that she and Jerad rarely go out to eat sushi anymore because they can get fish that's just as fresh and roll their own maki for much cheaper than they could in a restaurant. Point taken.

This was a couples' class, and I was paired off with Jerad's mom, Gwen, whom I had never met, but with whom I had plenty to talk about. We got along just fine in a sea of married and dating couples, and I enjoyed using my Encyclopedia Brown skills to determine those couples on awkward first or second dates.

I suppose it would make more sense for my first real cooking class to involve, you know, actual cooking. We really just prepped and assembled. The only cooked items were the edamame (this involves boiling water, something I can do quite well, thank you very much) and the rice. I suck at cooking rice, which also involves boiling water, but you actually have to pay attention to the rice so it doesn't burn. For some reason, I lack the focus to prevent rice from burning, and what kind of person would I be if I tried to make rice knowing I would burn it? Not a nice one. Instead, Gwen deftly julienned carrots while I snapped asparagus, then blanched the veggies. These tasks made me feel competent.

Jerad selected one lower-end (Sapporo) and one higher-end (Hitachino Nest) beer for the class. As the rice cooked, we enjoyed the Sapporo while noshing on edamame and spicy cucumber salad. Kelly explained her fish-buying process for sushi: She goes only to Bob's Seafood (where most local chefs get their fish), she tells them that she is making sushi so they direct her to what's freshest, and she asks to smell the fish to make sure that it doesn't smell like...well, fish. I don't normally buy or cook a lot of fish because my husband doesn't like it, but I do want to make my own rolls in the future, so this information is something I look forward to taking advantage of. 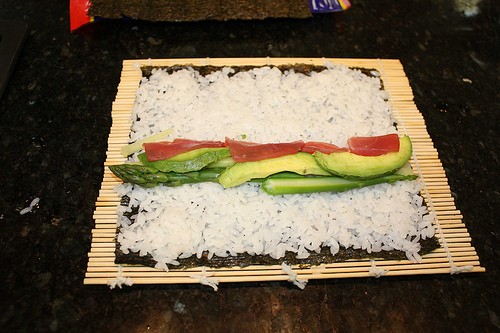 Then came the highly-anticipated portion of the class: learning how to roll maki (or as I like to call them, fish joints). In addition to being a hops prophet, Jerad is an excellent maki-roller and taught us well. Let me tell you about that rice: When they call it sticky rice, they aren't fucking around. Jerad's tip for working with sticky rice was to dip your fingers in vinegar and water repeatedly during the rolling process and to do the same with your knife when you slice the rolls. 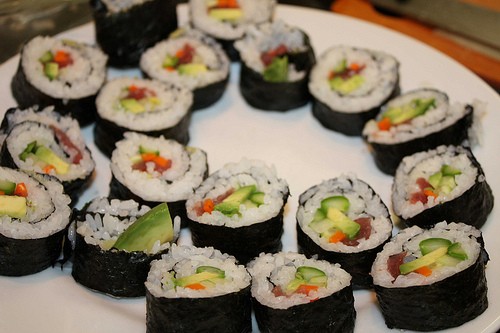 I made one roll with asparagus, carrots, avocado and tuna, and one with avocado, salmon, carrots and lemon. I love the texture of maki. The chewiness of the rice and nori, the smooth, buttery fish and avocado, the refreshing crunch of the veggies and the salty-sourness of the soy sauce combine to make a perfect mouthful.

I desperately wanted to abandon table manners and stuff my face with the fruits of our labor, but I thought better and used enough restraint to manage chopsticks and delicate sips of beer, thinking to myself Yeah, I made that, bitches. Delicious.