Photos: Best Beers for Fall (and Spring, Summer and Winter)

September 21, 2009 at 2:15 PM
comment
While it's only September, the Oktoberfestivities have begun, with many microbreweries rolling out their fall brews over the past few weeks. St. Louis' largest American-owned brewery, the St. Louis Brewing Company -- better known, of course, as Schlafly -- hosted its own party on Saturday at its Tap Room, with Hop in the City, where all 41 of the brewery's seasonal beers were on tap at once. Say it with me, 41 beers.

Oktoberfest 5.5% ABV, IBU: 25
Not only is this beer great for fall because of its name, but this full-bodied and malty sweet amber lager is perfect for the cool days of fall. Traditionally aged in March, this MÓ“rzen-style beer only gets better with age when it comes out for Oktoberfest each year.

Saison 6.2% ABV, IBU: 22
Released in late August, this medium-bodied Belgian ale starts the palette off with fruity and tart characteristics. Complimented by caramel malt barley and its amber color, this style is a leap forward from lighter summer beers to the familiar darker and heavier fall beers. 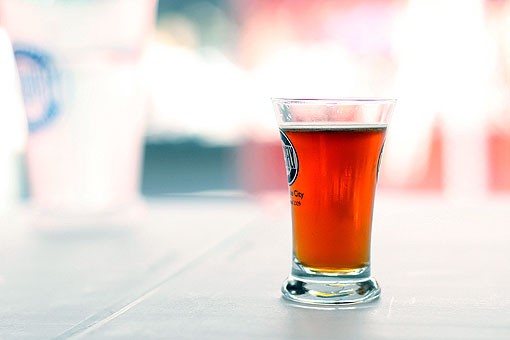 Pumpkin Ale 8.0% ABV, IBU: 16
Described as "pumpkin pie in a bottle," this full-bodied amber ale is made with all the familiar flavors you might sniff at Thanksgiving dinner. Malty and rich, this style is spiced with nutmeg, clove and cinnamon and made with -- of course -- pumpkin!

American IPA 7.2% ABV, IBU: 55
This style is all about hops, with three different kinds used. Don't be intimidated by the hop flavor: This beer has enough floral malt flavor to be a perfect blend for fall weather.

Summer Lager 4.5% ABV, IBU: 17
The name lager comes from the German lagern for "to store," as brewers around Bavaria stored beer in cool cellars and caves during the warm summer months.

Kellerbier 4.9% ABV, IBU:30
It is an unfiltered beer, often a lager which is not clarified or pasteurized, probably originated from Germany.

Bock 6.5% ABV, IBU: 30
Bock is a type of strong lager beer, first brewed in the 14th century in the Hanseatic town of Einbeck, Germany, from which it gets its name (originally "Einbeck" / "Einbock").

Maibock 7.0% ABV, IBU: 25
The Maibock style is a pale version of a traditional bock.

And what to drink to stay warm in the winter?

Imperial Stout 10.5%ABV, IBU: 50
Imperial stout, also known as "Russian Imperial Stout" or "Imperial Russian Stout," is a strong dark beer or stout in the style that was first brewed in 1796

Schlafly co-founder Dan Kopman has a taste of American IPA. Kopman says you definitely want to get your nose involved for a proper beer tasting.

The view of the festival atop the Schlafly Tap Room roof.