Check out this post's sequel: Even More Restaurants in Old Fast-Food Buildings.

As I posted a few days ago, a new Vietnamese restaurant is opening at 3737 South Grand Boulevard, inside a former McDonald's. I'll admit that whenever I see a locally owned business taking over a chain restaurant's location, I smile. After the jump, in no particular order, five of my favorite examples of this phenomenon. 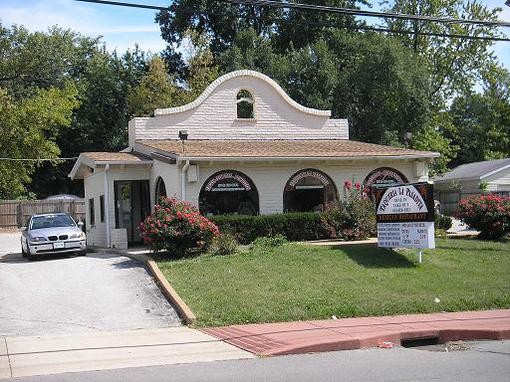 You couldn't come up with a more appropriate repurposing: The chain that has done more than any other to dumb down Mexican and Tex-Mex food is supplanted by a joint selling the real, um, enchilada. Or, to be more exact, goodies like tacos with chicharrónes and the best tamales I've had in St. Louis.

The pizza at Laganini, which features the cuisines of Bosnia, Italy, Greece and more, is so tasty it has successfuly vanquished the ghost of popcorn shrimp past.

Nobu's is one of the best sushi restaurants in town, but with its distinctive exterior, you'll be forgiven if you ask for the blueberry pancake sashimi.

Not to keep knocking Taco Bell, but even a medium curry at this Florissant standout packs more punch than any "Lava" sauce.

A posthumous award to this Vietnamese restaurant, which specialized in banh mi, the tasty sandwich as cheap as a burger (or fish sandwich, for that matter) at most fast-food joints.

Any examples I've missed? Let me know in the comments.