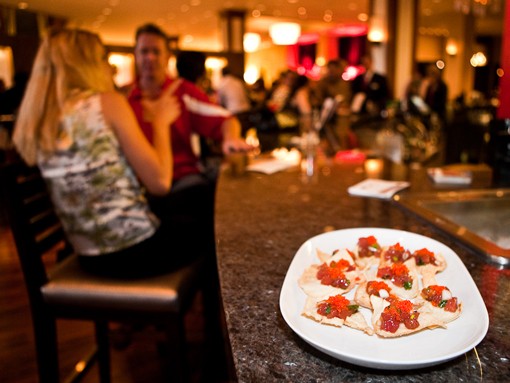 The grand opening of Red Kitchen and Bar (315 Chestnut Street) in the Hyatt Regency St. Louis Riverfront hotel was held last night. While there wasn't much food available -- mostly drinks, very large drinks and hors d'oeuvres -- the "menu focuses on small plates, creative cocktails, wines by the glass and a selection of RED specialties from its in-house smoker and pizza oven," according to a press release.

The executive chef is Michael Barber, a Culinary Institute of America graduate who most recently was the executive chef at another Hyatt Regency in Washington, D.C.. Barber started with the company in 1999 and has since worked at Hyatts in Orlando, the Dallas-Fort Worth metroplex and Atlanta.

Red is one of three restaurants in the hotel building, which was formerly the Adam's Mark. The other restaurants are the second area location of Ruth's Chris Steak House and the Brewhouse, a sports bar.

See a slide show of the grand opening here. Also: Stefani Pollack visited Red for an edition of Gut Check's A Table for How Many? column.