The Dive Bomber: A Celebration of Life at City Club

My friend Kim assured me that City Club, smack-dab in the middle of St. Charles' historic district, would fit my divey criteria. I didn't want to say I doubted her, but, well, I doubted her.

I've got to learn to be more trusting.

Sitting in a dumpy bar on a weeknight with Kim and her friend Corndog, drinking bottles of Stag with a handful of old men while watching 9/11 conspiracy shows on the History Channel constitutes dive-bomber behavior. That would have been plenty. But then Bryan blessed us with his presence.

I heard him before I saw him: "Who wants a shot? Because I'm buying fucking shots for everyone!"

Well, hell. I'll have a shot. A little Jack Daniel's never hurts, right? Besides, I felt like I'd earned it when Bryan looked at me and yelled, "Hey! Look at those big titties!"

That's how he addressed me for the rest of his visit: Big Titties. Just like seventh grade all over again.

Not that I was the only object of his affection. He was mighty fond of all three of us. "How about we have a three-way? Uh, I mean, a four-way?" Only if you can count how many people are in the room, Bryan.

"You'll tell me if I'm being obnoxious, right?" he asked, rubbing his ass all over my torso.

Normally, I'd punch someone who behaves in this manner, but I felt for Bryan. After he bought the round, Corndog asked him why he was so happy. Bryan lost a friend who left behind three young children in a situation so tragic that I can't say I fault him if he's been drunk since he heard the news. "You gotta live, man. You gotta live and have fun and turn up the jukebox! We need some Kid Rock!"

So we toasted to life, and we all drank too much while watching two fellow patrons setting fire to shots of overproof hooch and then downing them without extinguishing the flame. 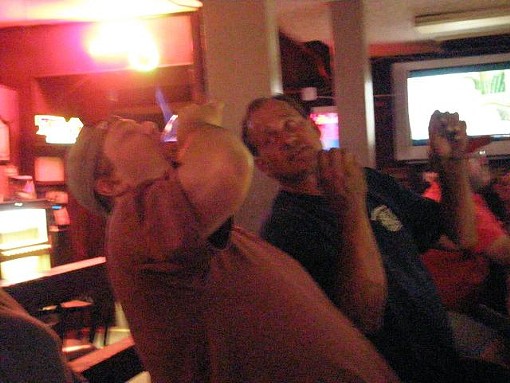 Bryan left with no fanfare long before Kim, Corndog and I shared post-midnight hugs in the middle of the cobblestone street. I hope he went home and slept as well as I did. I doubt that he did.