How Joy Grew in St. Louis

By now, everybody knows all about Julie & Julia, even those who have no intention of seeing the movie. (A theory on the ridiculous amount of media coverage: Nora Ephron's got the goods on every movie and food writer in New York.) Gut Check, however, would be remiss if we did not point out a link to St. Louis.

That would be a brief but memorable scene in which Julia Child gets to meet her cookbook idol, "Mrs. Joy," better known as Irma Rombauer. Rombauer, played by Frances Sternhagen with a wonderfully flat Midwestern accent (which contrasts nicely with Meryl Streep's Juuuuulia-ness), tells Julia and her two co-authors, Simone Beck and Louisette Bertholle, how she got screwed over by her publisher and did not earn close to what she deserved for her seminal book The Joy of Cooking.

That's not the half of it. 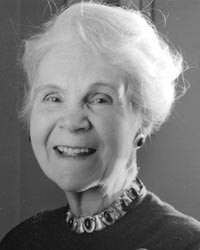 Rombauer got her start in the culinary world in the 1920s by teaching a cooking class for the Women's Alliance at the Waterman Avenue Unitarian Church here in St. Louis, despite her family's claim that she was "a TERRIBLE cook." Her main qualification, besides a fondness for hosting dinner parties, appears to have been that she took a cooking class herself during a family vacation to Michigan in the summer of 1915 which, according to her daughter and collaborator Marion Rombauer Becker, "brought out in her an unusual and at first rather inexplicable flair for decorating cakes."

In 1930, Rombauer's husband Edgar committed suicide, leaving her in precarious financial circumstances. She managed to amass savings of nearly $6,000, mostly by selling the family home, and her daughter Marion got a job as an art teacher at John Burroughs School. It was around that time that she decided to write a book.

Her daughter Marion recalls in a memoir:


My brother and I had often urged her to put into systematic order the underlying directives of a personal cuisine which had long since excited far more than a neighborhood appreciation. It was at this juncture, partly to comply, chiefly to distract her keen unhappiness, that she decided to spend another summer in Michigan, taking with her, needless to say, the mimeographed sheaf of recipes she had compiled, some eight years before, for the Women's Alliance.

Rombauer's biographer Anne Mendelson, in her book Stand Facing the Stove: The Story of the Woman Who Gave America The Joy of Cooking, has a less romantic explanation:


It was not a terribly pracical plan, but it matched her view of her position in society. The idea that gradually took shape in her mind was the simplest thing that could be jammed between a pair of endpapers by a woman of minimal formal education and little trained ability of any sort: a cookbook.

Whatever the case, within a year, Rombauer had assembled 500 recipes and published the book herself in St. Louis. It cost her $3,000, or approximately half her savings. The Joy of Cooking took what was then a novel approach to cookbook-writing, long the preserve of home economists who were more concerned with the science of food than with cooking it. (They were actually quite fascinating; to learn more, read Laura Shapiro's excellent book Perfection Salad: Women and Cooking at the Turn of the Century.) Writes Rombauer's grandson Ethan Becker in the book's 75th anniversary edition:


A complete amateur with no official credentials, [Rombauer] nonetheless knew that neophyte cooks somehow learn faster in the company of a friend. This small, chic, witty and immensely forceful woman appointed herself that friend.

The Joy of Cooking took a refreshingly commonsense approach. Its very first instruction: "Stand facing the stove." (This directive, sadly, seems to have been eliminated from the most recent edition, which came out in 2006.) 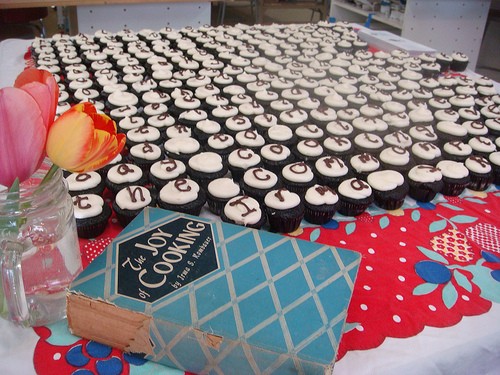 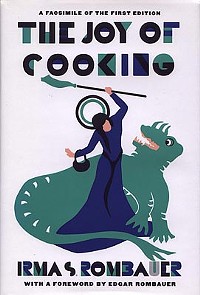 In 1936, Rombauer sold Joy to Bobbs-Merrill, the Indianapolis publisher that would proceed to screw her out of her deserved royalties. According to Mendelson, Laurance Chambers, Bobbs-Merrill's vice-president, bullied Rombauer into signing a contract that assigned Joy's copyright to the publisher. In other words, Bobbs-Merrill owned the book now, and could do whatever they wanted to it, and Rombauer could not take it to another publisher.

The Joy of Cooking turned out to be a cash cow for Bobbs-Merrill, taking in millions of dollars. Of all that money, Rombauer received only royalties, a piddling ten percent of the wholesale (not retail) price of every book sold.

(A special note to writers: Make sure you have a lawyer examine your contract before you sign it. If you, like Rombauer, find yourself in the terrible situation of having a publishing executive yell at you, bring a lawyer to the meeting.)

Rombauer's daughter, Marion Becker, joined her for the 1951 revision. Becker took over the franchise after Rombauer's death in 1962 and moved its base of operations to Cincinnati. Joy is now in the hands of Marion's son, Ethan, who inherited the book after Marion died in 1976. 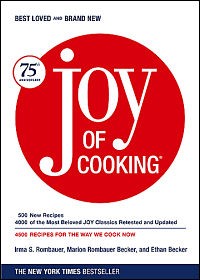 Gut Check must admit, it crossed our collective mind to do a Julie/Julia-style project with The Joy of Cooking. Lord knows, we need a little joy around here. That was until we realized that the current edition contains 4,500 recipes, including for things like braised bear, and advice about what to eat if you find yourself stranded in the wilderness. (Ethan Becker is an outdoors enthusiast.) Or in Europe, where the chocolate is...different.

We considered finding a copy of the original 1931 edition and working from there, but we were afraid the results would bear a too-strong resemblance to Throwback of the House, only less entertaining.

No, if we are to cook everything in Joy, we would need a brigade of St. Louisans. Who's with us? Come on -- we might get a book deal out of this.