More, including details on changes at nearby City Grocer, after the jump...

Culinaria features both staple groceries and Schnucks' new high-end Culinaria brand. It has a Kaldi's coffee bar, a sandwich bar, a wine bar and much, much more. You can even follow the store -- store manager, Tom Collora, to be precise -- on Twitter. 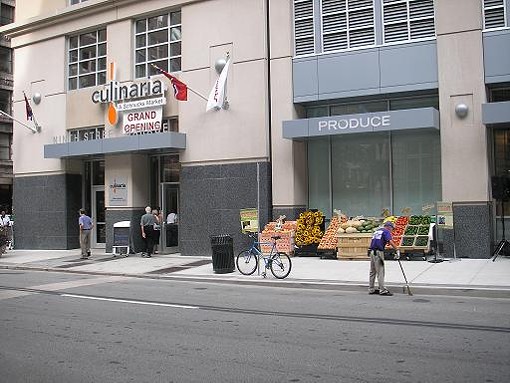 Grand-opening ceremonies were underway when I stopped by this morning, and the inside was packed. I decided to return later to scope out more detail when -- if? -- the store isn't so crazy. Look for a second report later this week.

Meanwhile, nearby City Grocers (920 Olive Street) has announced plans to transform itself into City Gourmet, with an emphasis on prepared food and fast-casual dining options, including a burrito bar. City Grocers will close after business Wednesday and reopen at 11 a.m. on Tuesday, August 18.