What Do Bess and Stephen Colbert Have in Common?

Like every other food blogger in St. Louis and probably the country, I went to see Julie & Julia over the weekend. (It was mandatory. There was a memo and everything.) I enjoyed it. A cat played a minor but almost heroic role. And it was so goddamned inspiring that upon returning home, I went online to see if Julia Child had ever bothered to concoct any cat food recipes. Alas, she never did, the selfish bitch. All she cared about was feeding people. I did, however, stumble across a very informative video clip.

Stephen Colbert has an assistant, so he stumbles across things in a much more timely manner than I do. Last spring, they discovered a study from the American Association of Wine Economists (yes! a real organization!; no! they do not appear to be taking job applicants) that revealed that 83 percent of those surveyed did could not tell pâté from dog food. (There were only eighteen people in the study, but hey, science!)

Stephen was distressed. How could our nation have fallen so far? When he gives his assistant one hundred bucks to get him pâté, she always returns with "the fanciest of feasts." He eats it from an elegant dish with a silver spoon, but the can it comes from is hauntingly familiar.


I bellowed for Bess and dragged her from her favorite windowsill so she could watch, too. She was displeased. She hissed and wriggled from my lap to the floor. But she did stick around to the bitter end. Her face was pointed in the direction of the computer screen, and the expression on it was grim.

It said, "How could you have the nerve to make me watch that man eat one of my favorite meals in the whole wide world after I've just endured another dinner of Purina?" It had its intended effect. I felt unspeakably guilty. Fortunately, we happened to have a can of Fancy Feast on hand.

There is nothing like a can of wet cat food to soothe the savage beast. The instant Bess heard that can pop, her hissing turned to impatient mewing. And as soon as the bowl hit the floor, her snout disappeared into a mound of chicken and tuna. 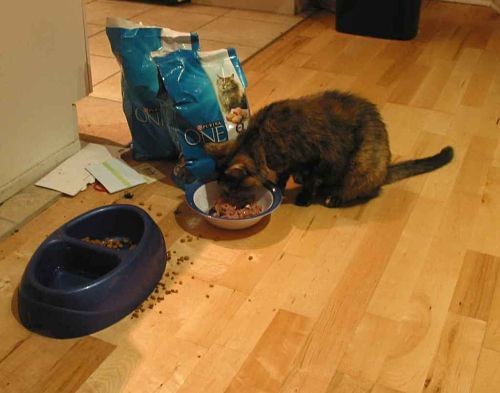 I watched her devour her (second) dinner and considered. Stephen Colbert claims to like Fancy Feast. Bess definitely likes Fancy Feast. This was only a slightly smaller sample than the dog food/pâté study, and it encompassed multiple species. Maybe there was something to this Fancy Feast. Bess graciously stepped aside for about two seconds so I could sample some, too.

It wasn't bad. I must admit, it was better than some of the meals I have concocted for her. Definitely better than the shrimp frozen yogurt. (I am sure my colleague Chad Garrison, who kindly tasted a spoonful and pronounced it reminiscent of a sweat sock, would agree.)

I think it may have even surpassed the Roast Beef Hash from Trader Joe's. The Fancy Feast, at least, was juicy, not oily. It was, as Stephen said, "a little on the salty side," but tolerable.

Ah, if only my culinary efforts could make my cat that happy!
I pulled out my copy of Mastering the Art of French Cooking and tried to commune with the spirit of Julia Child like that scene in Ratatouille where the rat communes with the dead chef. I had inherited the book from my grandma. It came to me in pristine condition. It had clearly spent more time on the bookshelf than in the kitchen (actually, it had probably never even seen the inside of the kitchen), and retained a comforting grandma's-house smell. So instead of communing with Julia, I communed with my grandma. Who I don't remember cooking much besides lamb chops and something she called "junk soup" and who detested cats.

She was, however, extremely fond of chocolate, to the point that my cousin distributed See's Candies at her funeral and everyone agreed it had been a fitting memorial gesture. I flipped through the dessert chapter. Julia hadn't done much with chocolate. In my head, I substituted chocolate chips for fresh fruit in the clafoutis, the tarts, the apple Charlotte.

And then I realized I have been going about this whole Cooking for Your Cat project all wrong.

If I were cooking French food for my grandma, I would cook with as much chocolate as possible. If I am cooking for Bess, I should use the food that she likes (though not chocolate, obviously, because it's very bad for her). Close observation over the past year has revealed that Bess likes: salmon, crab, shrimp, cottage cheese, orange juice, marrow bones (probably) and anything that makes her think she's getting away with something. Plus the ingredients in commercial wet cat food, most of which I cannot reproduce without the benefits of science. Oh, and pet cookies.

Very simple. In theory. (Except for all the vitamins and random stuff like riboflavin.) In practice, it all sounds like a recipe for a particularly disgusting bouillabaisse. But maybe that's what makes cats happy? Well, my cat.