15th Avenue Coffee and Tea opened in Seattle last weekend. While a coffee shop opening in Seattle hardly qualifies as "news," this was different, thanks to the "inspired by Starbucks" etched on 15th Avenue's front door. This is Starbucks' latest attempt to return to its roots with a greater focus on coffee and an "independent," neighborhood feel.

(View a slideshow of the new concept café and read an early review in Seattle Weekly.)

15th Avenue certainly seems to be putting coffee front and center: The café will have multiple brewing options, including a pour-over bar, manual La Marzocco espresso machines and the Clover. The use of the Clover, however, strikes me as a little underhanded on Starbucks' part -- not to mention a giveaway that the coffee behemoth is the café's real owner.

Last year, Starbucks bought Coffee Equipment Company, which produced the Clover, and locked down any new orders of the machines. (This Wired article covers the deal.) While the company still services existing Clovers, no new machines have been sold outside Starbucks. (The only two Clovers in St. Louis of which I'm aware are at the Kaldi's in the Crescent.) 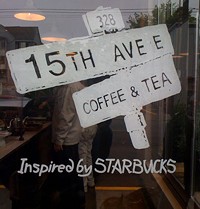 The Clover was a way for smaller cafés -- especially those that roast their own beans -- to court a more sophisticated clientele. It's basically a large, automated French press. What makes it special is the possibility of customization. The same coffee can taste completely different depending on how heat, pressure, time and so forth are applied to the grounds. Granted, there has been a lot of hype around the Clover, but there's a certain irony that as Starbucks tries to find its soul in this new concept café, it will be showing off the very equipment that it's denying to so many other, legitimately "indie" cafes.

So, great, there's a bigger emphasis on brewing...but 15th Avenue will still serve Starbucks coffee, and no matter how coffee is brewed, the beans that are used are just as important. Starbucks has announced that while 15th Avenue will use the company's own beans, they will be roasted in smaller batches (see my previous post on roasting) in an attempt to improve the quality. This is an interesting thing to hear from a coffee company -- an admission that its mass-produced product has room for improvement. I'm curious to know what small-batch roasted Starbucks would taste like. Would its flavor stand up to the sharp attention of a Clover?

An Examiner.com article points out that this was not Starbucks' first try at a concept café: Circadia Coffee House in San Francisco and Café Starbucks in Seattle both flirted with full food options and alcohol. 15th Avenue is also supposed to host poetry readings and other classic coffeehouse activities. At that point, though, why not just keep your high school reading group at the other Starbucks in the Barnes & Noble?

On the other hand, why shouldn't Starbucks try to find a way to reconnect with its roots? After what must have been one of the largest and fastest expansions of any franchise in America, it's no wonder the brand lost its soul.

At the very least, Starbucks corporate management understands that there is a problem. I'm willing to give them a chance to improve their product and their café experience.

Some might think that this is supposed to be Starbucks' attempt at siphoning off unsuspecting café dwellers, but let's be honest. The faux Bohemians already go to Starbucks, while consumers serious about supporting local establishments are usually keen to what's what. The threat of a convert Starbucks duping locals is farfetched. And with no more than two additional 15th Avenue cafes planned in the Seattle area, it's doubtful that anyone in the Midwest will have an opportunity to gripe about it first hand.