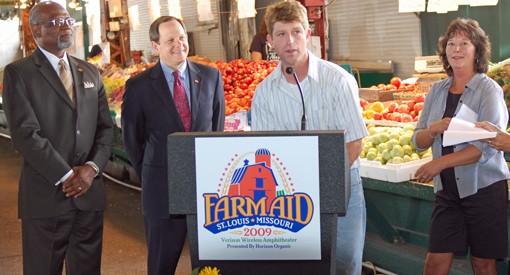 A rural Missouri farmer who provides produce to some of St. Louis' critically praised restaurants was a featured speaker at today's Farm Aid press conference at Soulard Farmers' Market.

Food blogs and conscious diners are focusing more than ever on locally grown produce and locally raised livestock, and it appears Farm Aid has followed suit by highlighting Claridge's local distribution of food from more than 140 farmers in Missouri. He operates the Root Cellar, a Columbia-based local grocery, and plans to open Broadway Brewery, a micro-brewery and local-food restaurant, also in Columbia, this August.

Claridge has been to several Farm Aid concerts with the Missouri Rural Crisis Center and characterized the concert as a place for like-minded individuals to share ideas about local farming. Missouri ranks second in the nation in the number of independent farms, behind only Texas.