The Best of Gut Check: The Snoopy Snow Cone Machine, or A Boy and His Dream - A Photo Essay

While Gut Check is on vacation, enjoy highlights from the past two years.

In this week's review of area snow-cone stands, I mention my childhood obsession with the Snoopy Sno-Cone Machine. This toy, first manufactured in the late 1970s, seemed the ideal summer activity: Make your own icy treat and -- this is America, after all -- sell them to your friends for a profit. My parents refused to buy me one. And for twenty-odd years, my resentment has lingered.

As I researched snow cones and snowballs online, I learned that the Snoopy Sno-Cone Machine is still being manufactured. In fact, it's sold at Wal-Mart and Toys 'R' Us. After a desultory morning spent fruitlessly wandering the aisles of a nearby Wal-Mart -- seriously, is there a more depressing store? -- I was beginning to think the Snoopy Sno-Cone Machine would remain the dream of my younger self. However, thanks to Niche and Veruca pastry chef Mathew Rice, I learned that Urban Outfitters sells the toy. It costs twice as much as it should -- but, really, can you put a price on a dream? I plunked down my $26 and returned to Gut Check International Headquarters, ready for some kind of epiphany. First, though, I had to assemble the thing.

This wasn't so difficult. But I did learn that my review misstates how the toy works. You don't squeeze the dispense the syrup from Snoopy's head. There's a separate syrup bottle. 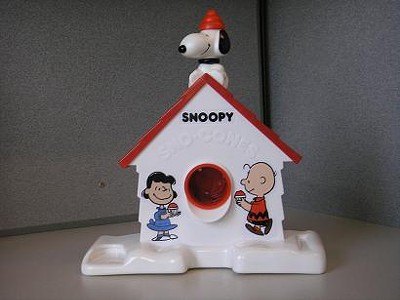 Here you see the assembled toy. It's ready to shave ice. But you also need to prepare the syrup.

As I mentioned yesterday, the syrup recipe is to dissolve a cup of sugar and the Flavor Aid packet in a half-cup of water. I did that at home this morning. The recipe produces much more than can fit inside the snowman syrup dispenser pictured above, which prompted much swearing and mopping up with paper towels in my kitchen.

In the picture above you can see the size of the syrup bottle relative to the toy. The plastic water bottle holds the excess syrup. (The excess that didn't end up on my kitchen counter, that is.)

You have to turn the crank several times to produce enough ice to fill one of the Dixie-sized cups provided with the toy.

I've been working on the same ice cube for a while now.

This is actually really freakin' tedious.

I decided that this was close enough to a full cup of shaved ice.

Above you see a close-up photo of the (nearly) full Dixie cup of shaved ice. All that's needed now is syrup. And a spoon. Of course, I didn't think to bring a spoon. Fortunately, the Snoopy Sno-Cone Machine comes with a miniature snow shovel to remove the ice from the machine so that will have to do.

Here's the product of my labor, already melting into a pool of purple liquid. The ice is much more finely shaved than I expected. The syrup? Well, I think Annie described it best: "This tastes like the cough medicine they give you when you're a kid. Robitussin." Yup. After all these years -- all that dreaming -- I have a Dixie cup of icy Robitussin. Except it won't get me high. But don't take my word for it. Should you find yourself in the neighborhood of Gut Check International Headquarters, you can try one for yourself.

If I'm not here at the time, I'm probably at Tropical Moose.