Crowds, kegs out back, live music and coffee -- lots of coffee. While it might sound like that college party you don't remember very well (the one that ended up at Uncle Bill's at 4:00 am), it was, in fact, Kaldi's Summer Barista Jam.

Last Friday, Kaldi's Coffee Roasting Company hosted its third barista jam, a barista-education and coffee-industry pow wow for St. Louis and the Midwest region. The theme for this season's jam was "back to the basics," an intense focus on espresso roasting, presentation (latte art, etc.) and other techniques.

When I walked in the side door to the office lobby (I use this term loosely for those that are familiar with the space), caffeine-crashed baristas and enthusiasts were lounging on sofas and chairs. By the time I arrived around 6 p.m., the event had already been going on for ten hours. About half the participants at the jam were Kaldi's baristas, with local and regional industry types making up the rest. 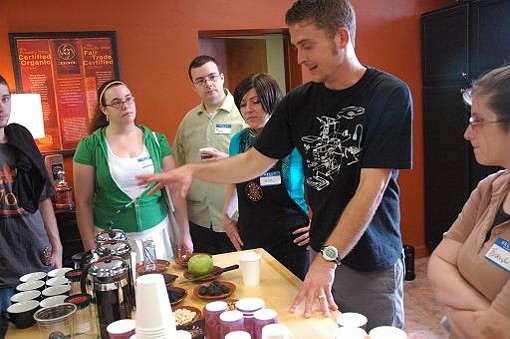 A long espresso machine stacked with dozens of mismatched, brightly colored demitasse cups took center stage. Opposite the espresso machine was another table covered with five cardboard boxes filled with different espresso roasts with labels on the side. Baristas and civilians were dipping white paper cups into the boxes, pulling up the exact proportions of their signature blends. The "Happy Hour Barista Challenge" was on its way.

Roasters Andrew Timko and Joe Marrocco presided over the judging, following the same criteria used at the Specialty Coffee Association of America's Midwest Regional Barista Challenge last fall. Espressos were judged on the color, consistency and persistence of the crema, taste balance and tactile balance (full-bodied, smooth, and so on).

"The color aspect shows a lot about what you're going to taste," Kaldi's owner Josh Ferguson said, describing the espresso's crema. "Good crema won't break as you tilt the cup it's served in," he finished, illustrating the "consistency and persistence" criteria.

Inbetween the espresso and cappuccino competitions was the coveted latte art seminar. One of Kaldi's trainers, Dale Bassham, led a tutorial on the frothy craft. "In the course of an eight hour shift, you've really only got 20 seconds to connect with each customer. Latte art is a way to show that extra attention to detail and pride in what you do."

Latte art isn't all about looks though. "I've seen beautiful latte art that tasted like cigarettes and chocolate milk," Bassham told me.

What is the secret of good latte art? Bassham said, "Good espresso and well frothed milk is art in itself." He seemed so close to saying love was the secret that I heard it in my mind's eye. By this time in the afternoon, though, Dale was balancing a half empty plastic cup of beer on top of an empty demitasse cup -- not an easy task. I'll cut him some slack. 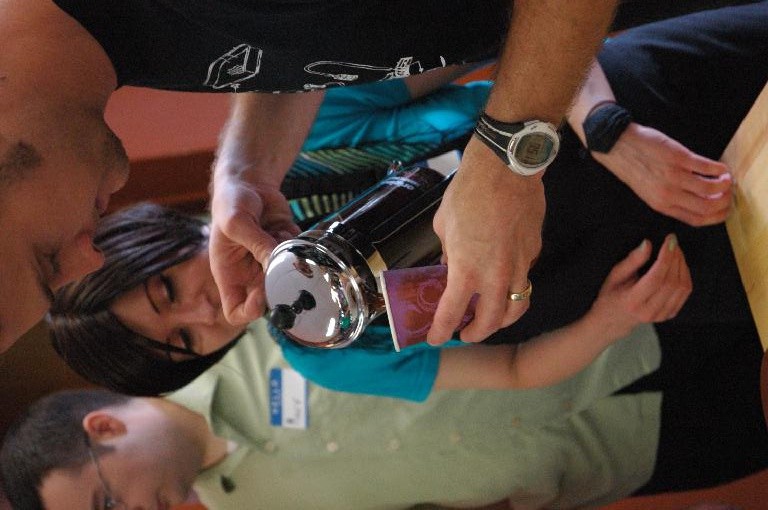 Staying true to the theme of "back to the basics," the Jam featured a class on home brewing. "One of the most common questions we get is, 'I've got these great beans at home so why doesn't my coffee taste as good as yours?'" said Robyn Niesmann, manager at Kaldi's DeMun café and instructor for the day's brewing fundamentals class.

"Most people's problem is the Mr. Coffee they're using at home," Niesmann explained. "The basket usually isn't deep enough to get an even exposure for the coffee. You get that donut look where all the water overbrews the middle of the coffee grounds and leaves the rest untouched. Then there's water. A lot of those automatic machines don't get the water hot enough." Ideal water temperature for coffee brewing is about 200 degrees.

The solution? "Try a French press or a Chemex," Robyn recommended. I was familiar with a French press, thank to my recent conversion, but I needed a reminder as to what a Chemex was. As soon as I saw it, I recognized it from the kitchen of my aunt's cabin. A Chemex has a glass vessel with an hourglass shape and a wooden grip around the waist. Using a gravity method of brewing, "A Chemex puts the control back in the brewer's hands," Niesmann said. "You've got control over how hot your water is and making sure the coffee gets even exposure to the water." 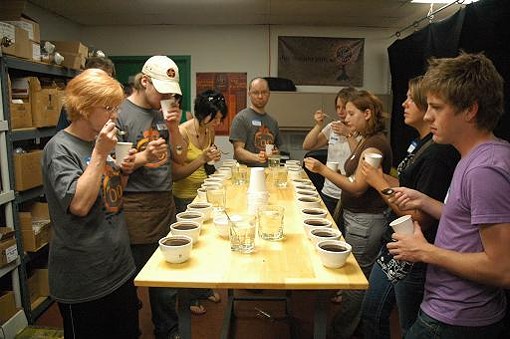 Besides the seminars on the best ways to serve coffee, loftier topics were discussed at the jam. During the Barista Guild of America meeting, the topic of educating consumers on the value of artisanal coffee was at the top of the list.

"Consumers want better coffee when they know what it is. I'd say about 95 percent of consumers need a dramatic experience to break the economic barrier [between artisanal and commercial coffee]," Ferguson said. "There are lots of entry points for consumers, from social justices issues like Fair Trade and organics, but ultimately people need to taste the difference."

With a focus on barista education and in turn, consumer education, events like the barista jam aim to increase the market for specialty coffee in the Midwest.

Oh, and the winner of the espresso competition? Josh Ferguson. Sounds like the judges took scrupulous notes at the "How to Keep Your Job at a Coffee Roaster" seminar that afternoon.