June 30, 2009 at 5:00 PM
comment
James Fiala, who already operates three restaurants in the St. Louis area, will open the Terrace View Cafe, on the northwest corner of the new Citygarden downtown, later this month. 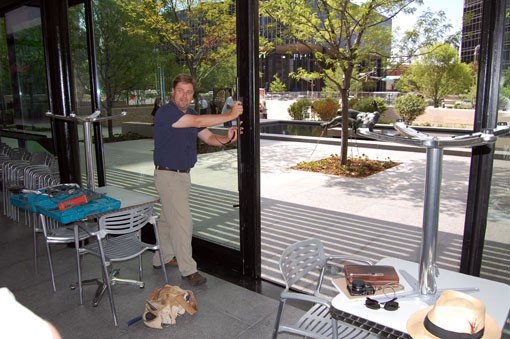 Fiala also owns the eleven-year-old Crossing in Clayton, the six-year-old Liluma in the Central West End and Acero in Maplewood, which opened a little more than two years ago.

Fiala says the "best case scenario" is to open the cafe by the July 14 All-Star game. On Tuesday morning, Fiala was at the restaurant. It will feature "Midwestern ingredients with Mediterranean flavors" and include a Mediterranean wine selection.
Inside, there will be room for about 50 diners and ten more at the bar, with room for an additional 60 on the cafe's outdoor patio.

From his other restaurants, Fiala is bringing his beet salad from the Crossing, his burger from Liluma and his gnudie -- a kind of naked ravioli -- from Acero.

The chef will be Mark Chris Bork, formerly of Revival, which closed in May.

Admittedly, Fiala is nervous about his newest venture, a project he was offered just a little more than two and a half months ago by the Gateway Foundation, the group which financed the Citygarden park that opens to the public Wednesday.

"I'm nervous and a little overwhelmed. [The Gateway Foundation] built this place from the ground-up," Fiala said while standing in the dining area, which still slightly has the feel of a dusty construction site.

To align with the public intent of the park in which Terrace View Cafe is located, Fiala said its doors will be open to everyone.

"I don't want it to be just for the elites, I want to be able to cook for the people of St. Louis," he said.

The cafe will serve lunch, cockatils and dinner. In September, a "light organic breakfast" will be added to the menu, according to hand-outs.