The Dive Bomber: One Beer at a Time at Claudia's Pub

The Dive Bomber: Now on Thursdays!

When we took our bar stools at Claudia's Pub, my friend Holly noticed a sticker on the shelf above the toaster oven: an Alcoholics Anonymous "One day at a time" sticker. I wonder if the sticker's a vestige from the pre-Claudia owner.

That would make for an interesting story. A bar sold by a recovering alcoholic who plasters the place with AA slogans before taking leave.

Not that Claudia's needs help in the story department. Connie, our bartender, told us that the eponymous Claudia has owned bars throughout St. Louis for decades. At 80, Claudia still comes to her pub for closing time every night, and she runs a tight ship on employee dress code: No jeans, no shorts and no low-cut shirts. They distract from the posters of bare-assed 1980s women above the video games and shuffleboard. 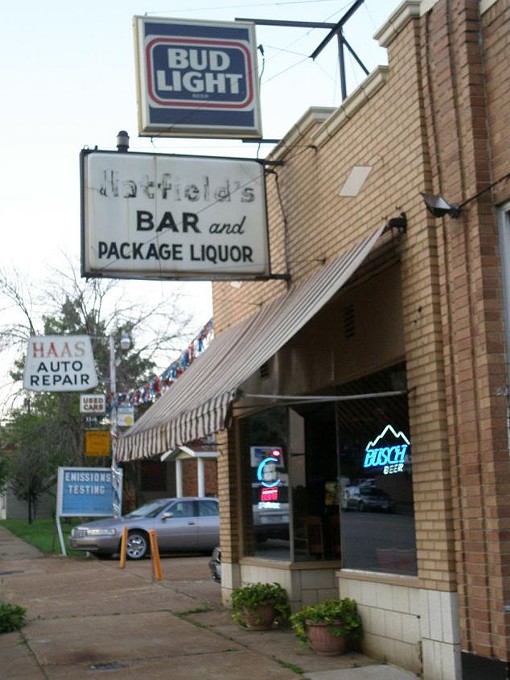 Holly suggested a round of shuffleboard, even though neither of us knew what we were doing. After ten minutes of watching us play the game as if it were air hockey, Connie and our fellow patron, Jimmy, told us how to play. It took a long time for us to hit our 15-point limit, but we got a lot of entertainment for one dollar.

Holly whispered to me that the place smelled like armpit when we first entered. Actually, it wasn't the room. It was one particular patron who left shortly after our arrival. Later in the evening, Connie gave us the low-down. He's an old man who stops in for glasses of water. Never drinks alcohol. Just comes in for a cool water and, sometimes, to rant about his neighbors.

Claudia has warned him to bathe before he visits. Since this was one of the hottest June nights on record, I was willing to cut the stinky man some slack. We'd been forgiven for our shuffleboard ignorance. Isn't that one of the twelve steps? It should be.