Last summer I was in New York visiting friends over Memorial Day when I first saw the signs. Walking between friends' apartments, going to restaurants and even a backyard barbecue in the West Village, I kept seeing café windows advertising cold-brewed coffee. Between the cafés and people I spoke with, it seemed that cold-brewed coffee was sweeping the city in the face of summertime heat. With the official start of summer coming on fast, I still haven't seen cold-brewed coffee sweep St. Louis off its feet -- at least, not yet.

The biggest difference between conventionally-brewed and cold-brewed coffee is the drop in acidity and bitterness. Cold-brewed coffee is generally lighter on the stomach and takes on a slightly sweet taste. I've heard some cream and sugar fans say cold-brewed coffee is so smooth that they don't need to cut it. For some this might be their coffee habit's Holy Grail. It may even be a great way to introduce new drinkers to black coffee.

The methods vary, but the central idea is always the same. Cold-brewed coffee is based on the total-immersion technique that a French press uses. Depending on your preference, the grounds steep in room temperature water from anywhere between twelve and twenty-four hours and then voilà: cold-brewed coffee. 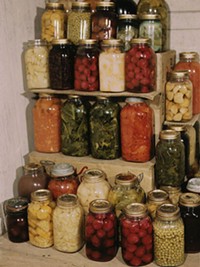 While you can buy cold-brewing hardware (namely the Toddy), cold brewing is so easy there's really no need for specialized equipment. Some popular posts even suggest something as simple as spare mason jars as the basic hardware for cold brewing.

I don't know about you, but I'm a little light on extra pickling jars. So if you're not into making coffee the way the Boxcar Children would, I recommend a French press.

The main advantage to using a French press is that you already have a sieve to separate the grounds from the coffee. Otherwise you'll be pouring the coffee with loose grounds in it through a separate sieve and then back through a finer filter to remove that last bit of muddy residue. Save yourself the extra steps and maybe the mess too.

When I approached this topic I wanted to be sure that there was a palpable difference between conventionally brewed and then chilled coffee and cold-brewed coffee. Emulating my high school biology teacher, I tried to make my experiment as scientific as possible.

The experiment went like this: I brewed an average cup of coffee with my drip coffeemaker and refrigerated it overnight. (A little more than two heaping tablespoons for every eight ounces.) I put plastic wrap over the top to avoid unwanted flavors tainting the coffee. I considered this my control experiment. Then I took my French press and added eight ounces of room temperature water to 14 grams of ground coffee. I placed the press' lid on top and waited overnight.

When 12 hours passed, I pressed the plunger down to separate the grounds from the coffee. I then poured the coffee through a single cup filter into a glass. The final comparison came when I brewed the same coffee with a French press using the typical hot water method.

So what is the difference between cold-brewed coffee and chilled conventionally brewed coffee? More than I thought. Compared to the cold-brewed and hot water French press, the refrigerated drip coffee placed a sorry third. Drip coffee has a nice flavor when it's hot and fresh but the concentration of coffee flavor did not hold up when chilled. Instead, the chilled drip coffee tasted watery and stale. (Note: I've heard that some cafes avoid this watery taste by brewing their drip coffee double strength and then chilling it.)

The cold-brewed coffee, on the other hand, was as refreshing as iced tea. It had little acidity, almost no bitterness and a sweet flavor. When I say the coffee tasted sweet, I genuinely mean it. The coffee wasn't sugary but possessed a sweetness that the average taste buds could distinguish beyond how black coffee drinkers talk about sweetness.

An important point to remember when cold brewing is that the mahogany-colored liquid you're left with is a coffee "concentrate." As someone who enjoys a strong cup of coffee, I was dubious of the need to cut the concentrate with a one-to-one ratio of water. While the concentrate tastes fine over ice, the one-to-one water/coffee ratio really does improve the flavor. While the concentrate maintained some of the bitterness that puts off some drinkers, the cut cold-brewed coffee was light in body with a sweet, refreshing taste.

Hot-brewed coffee with the French press reigned as the fullest flavored; it also had the best balance of acid and body. There are certain flavors and attributes that will come out only when heat is applied. However, the cold-brewed coffee did retain some of the nutty notes that distinguished the hot-brewed coffee.

I used a light roast Kenya AA in my experiment. I'd be curious to know how a dark roast holds up to the process. Since cold brew is a relatively new technique, I'd love to open up the discussion to learn about others' recipes and roast preferences.

Some might approach cold-brewed coffee as I did: a curiosity, but not a replacement for my daily cup. But there's more to cold-brewed coffee than a more approachable version of the classic drink. The goal is not to replicate the same flavors of conventional coffee. Rather, cold-brewed coffee is a testament to the versatility of the bean rather than a compromise of its "true flavors."

So chill out and give it a try. You've got twelve hours to go before your coffee's ready.