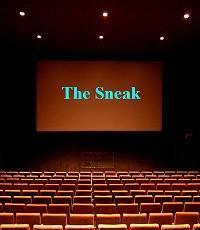 There's an essential difference between discipline and morality, even when one is sneaking food into the movies. As I've discussed in previous posts, sneaking has its own ethics and its own style, a code less concerned with slavish devotion to rules than the currents of compassionate and appropriate behavior woven through the fabric of the situation.

I consider myself, as a Sneak and a person, to be more moral than disciplined. Displays of discipline for their own sake are fascinating to me.

Thus, my reaction to learning about the 48-Hour Film Project, which recently came to the Tivoli.

I was inspired. My creativity has been largely confined to making and repackaging food in a loose-limbed, rangy, casual way. I wanted to experience the way creativity pushes back against rules and, like ice radiating out from the black bark of a downed branch and sketching across the surface of a pond, becomes more beautiful for it.

For my 48-Hour Sneaking Challenge, I set the following rules:


1) The meal must be sneakable.

2) The meal must consist entirely of things that were in my apartment 48 hours before preparation began.

3) No sandwiches. Sandwiches are cheating.

Luckily for me, this coincided well with the Holy Crap, What Am I Going to Do With All This Produce I Got from the Farmers' Market Challenge. Also, I had some help.

My very capable friend, Jim, came over with what he claimed was supposed to be the cheapest bottle of red wine at the grocery store. Instead, it had cost the princely sum of $3 more than the cheapest bottle. Jim and I agreed that $3 is the approximate value of the love he bears for me, and I put him to work.

While I had massive amounts of produce in my refrigerator from my weekend trip to the market which passed the 48-hour time limit, I'd also just returned from the grocery store with two pounds of Gulf shrimp, intent on using them for another, non-challenge meal the next day. I put them in the refrigerator and tried not to think about them while Jim opened the wine and we made small talk. I tried not to hear their tiny, crustacean siren call as I washed the completely contest-kosher asparagus, peppers, corn and tomatoes. I tried to think of anything and everything else when I started the water for the pasta.

I was weak. I used the shrimp. They were goddamn delicious.

Here's how my challenge (with minor cheating) turned out:

Melt the butter in a deep saucepan and sautée the garlic until just golden. Mix in the shrimp to butter them up. Stir shrimp on medium heat until they're firm against the tip of a wooden spoon but not quite done, then add the wine and tomatoes and simmer until about half of the wine has cooked off. Add the basil at the end, then stir in the orzo. The trick is not to overcook the shrimp while still letting the marsala soak up enough of the flavor of the garlic and seafood to create a sauce that coats the orzo but isn't too heavy.

(The hardest part of this recipe is preparing all those vegetables, which gets exponentially easier when Jim is at your house and has been told he can't eat unless he does a good job. This threat is particularly effective if given with a steel-eyed glare over the top of a glass of the second cheapest red wine at the grocery store, a technique I feel was unfortunately left out of The Joy of Cooking in favor of parboiling or something.)

Begin to brown the onion in the oil over medium high heat. After that, it's a simple botany lesson: What vegetables have the highest fiber-to-water ratio? They need to cook longest to soften those cellulose bonds, so they go in first.

Jim is one of my more disciplined friends. As a kid, he was an Eagle Scout and an altar boy. He's a long-distance runner, and we met because of a mutual interest in an unusual and demanding martial art. However, this does not apply to going back for second helpings, for which he is well known. He particularly liked the shrimp, and I haven't had the heart to tell him it was the only illicit part of the meal, because I'm afraid it might sap his enjoyment of it to some degree. I may not be disciplined enough to follow the rules, but I'm moral enough not to ruin the meal.

The very next day, I snuck this meal, lovingly separated into two flat Tupperware-style containers, into a location I will not disclose except to say that they have recently put a giant sign up at the front desk declaring that food is not allowed. I also brought in some crackers and wonderful pine ash covered goat cheese that fit the original 48-hour parameters.

(Crackers should be carried seperately, no matter how dry you think the other food is, no matter how little time they must spend en melange. Otherwise you will end up with sogged crackers.)

The Doctor, my mysterious long-time gentleman caller and dining companion for Round 2 of the 48-Hour Sneak Challenge, is my kindred soul when it comes to the difference between the proper thing to do and the right thing to do. He was also hoping for seconds, but got the additional condiment of eating the food illicitly, but in precisely the right place and time. What value could a rule possibly have when it tells you enjoying cold shrimp orzo and a good weizen on a hot early summer night is not the proper thing to do?

Now is the time for all good sneaks to come to the aid of the undisciplined, but good. Pack a meal -- no sandwiches; sandwiches are cheating -- and enjoy yourselves this week. May I suggest the Best Of the 48-Hour Film Project at the Tivoli on June 16?