I got a GPS for Christmas last year, which has led to me getting lost more than I ever did before. Instead of leading me to the bar I wanted to visit, it led me to an industrial complex south of what remains of the Chrysler plant.

While driving in circles, I noticed the cocktail symbol on the GPS's screen. Figuring I had a better chance of going there instead of continuing for search for a bar so obscure satellites can't find it, I found myself at Fenton Bar and Grill.

As I was parking, I saw a cat dart under the building's porch. A good sign, considering my affinity for bars with cats, drinks named for cats and guys who accuse me of being a cat.

A most unusual sight: a bar jumping like it's Friday on a Monday. At 7:30, people filled every table on the covered porch and a good portion of the tables inside. I took to the bar, with a few other lone drinkers.

This job lends itself to drinking a lot of Bud products, so I was glad to see bottles of PBR.

(The poor bartender had to use a flashlight and do a handstand in the cooler in order to find one, though.)

"What made you start drinking PBR?" the middle-aged man beside me asked. 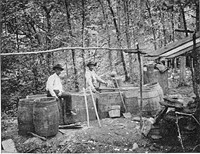 "I'm an insufferable undercover hipster," I replied. Well, not really. Instead I mumbled something about not supporting AB InBev and liking cheap beer.

I wasn't feeling talkative. That is, until my new friend started telling the bartender about his Friday night, spent drinking 189-proof moonshine, made from Popcorn Sutton's instructions. For the next hour, I learned how to make enough booze to stock a home bar.

I also learned that when you set fire to moonshine, don't drink it if it burns green -- and that I'm better off throwing the GPS out the window and following my gut (and the cats) in my bombings.