Cooking For Your Cat: Cat Munchies

This is a rare occurrence these days. In our old apartment, she hissed a lot, but that was because one of our cat-roommates, Henry, was an asshole. He liked to eat her food and lie on her favorite spot on our bed. It wasn't like he was deprived. He had his own gourmet food and soft kitty-bed. He just liked to be annoying. Which is why he was an asshole.

Tonight she just hissed at a young man standing beneath her favorite window talking loudly on his cell phone. This is also assholish behavior.

It's true, she could have jumped down and gone to another window, or to lie on the couch, or made a little nest for herself on the bed. But it's the principle of the thing. She wanted to sit in this particular window, which is up high and makes her feel tall and even more goddess-like than usual. And this asshole was spoiling it.

She was probably also irritable. These things seem more egregious when you're irritable. And it was all my fault.

I have been very irritable lately. This has manifested itself in me sleeping a lot, listening to Leonard Cohen on repeat and reading books about food and also the Geographic Expeditions catalog, which advertises trips to glorious locales, like Samarkand and Bhutan and Antarctica for anyone who has $10,000 to spare. (I don't.) The pictures are quite beautiful, and I sigh a lot, which makes Bess unhappy because she likes to sit on my stomach when I read and sighing disrupts her perch.

When I am irritable, I like to spend lots of time cooking and eating things that taste good, like waffles. Not challenging, gourmet food. Just simple, comforting food. I'm sure Bess wouldn't turn her nose up at another can of Evanger's (actually, she didn't; she dined on pheasant to celebrate the end of Passover), but this mood, I thought, called for something less...grand.

I found this splendid-sounding recipe on the Internet. You cook a cup of rice in two cups of bouillon or stock in your preferred flavor. If I were Julia Child, I would have made fish stock, but I'm a lazy and irritable ass, so I used the cheap chicken bouillon I found in the cupboard. After all the bouillon gets absorbed, you dry the rice in the oven. Then you fry it up on the stove until the grains of rice start to puff. 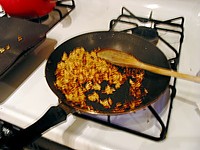 I was expecting something dramatic, like popcorn popping, that would turn the rice into Rice Krispies. But instead, it just started to burn. So I took it off the heat.

Bess had wisely decided to avoid the possibility of assault by splattered oil (yes, this happened to me -- quite recently, in fact, like yesterday) and had gone back to her window. The asshole appeared to be gone.

The Cat Munchies turned out well. At least I thought so. They had a nice, savory flavor and a satisfying crunch.

She jumped off the windowsill with an uncharacteristically graceless thud and ambled to her bowl. She looked at its contents. She looked at me. I popped some more rice into my mouth. "Yummy!" I said encouragingly.

She looked at the bowl again. She edged closer. And then she abruptly turned and walked away.

Later, as we read the detailed itinerary of the Geographic Expedition to The Khanates of Central Asia, I tried to feed her a clump of rice from my own delicate and capable hand. She batted it away with her equally delicate and dexterous paw.

Guiltily, I pried open the last can of Evanger's, Beef Tips in Gravy. I didn't even have to call for her. She trotted to the kitchen and meowed impatiently as I dumped it into a bowl.

"Well, it's come to this," I thought, as I watched her devour the beef and absentmindedly munched on the rice. "I am eating my cat's rejects." 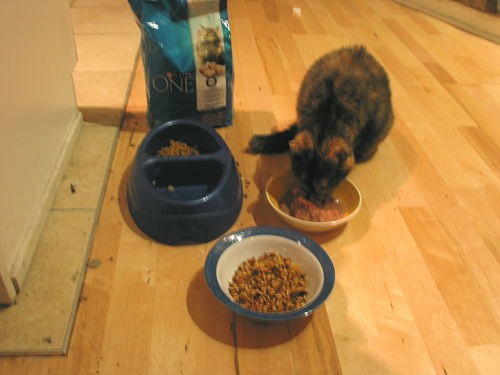 It was clearly time for more escapism. If I continued to read about Julia Child, I would just continue to feel like shit. So I switched to an account of a possibly-demented Englishman's quest for a lost Amazonian city. He eventually disappeared, but not before getting really bit up by mosquitoes and invaded by maggots. Sometimes you need a book like that to remind you how much more irritating life can actually get. (It's The Lost City of Z by David Grann by the way and it's really terrific, maggots and all.)
Bess finally emerged from her beefy bliss and crawled into bed next to me and nuzzled my elbow.

"Eh," she said. She only says that when she's really, really happy. I rubbed her jaw for a while. Then she curled up against my hip and purred.