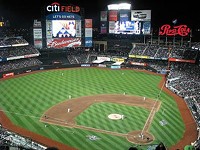 My colleague Chad Garrison passed along this Wall Street Journal article reviewing the food at the Yankees' and the Mets' new stadiums. Restaurateur extraordinaire Danny Meyer receives a whole lotta love for his offerings at the Mets' Citi Field. These include outposts of his ridiculously popular Shake Shack as well as his barbecue joint Blue Smoke.

Why should we care? Well, there are two St. Louis-area connections to the grub that Mets fans can enjoy. Danny Meyer is a St. Louis native, and local -- well, really, national, but locally based -- barbecue legend Mike Mills of Illinois' 17th Street Bar & Grill consulted on Blue Smoke.

Meanwhile, here in St. Louis, Cardinals fans can look forward to another season of...El Birdos Cantina? Giant turkey legs? Seriously, when Busch Stadium hosts the All-Star Game in three months, what will the thousands of out-of-town fans think of the concessions? Is there anything even distinctively St. Louis about the stadium's food? I mean, I've seen Dippin' Dots at Busch -- and how, exactly, has Dippin' Dots survived so long? hasn't it been the "ice cream of the future" for, like, twenty years now? -- but if you can find Ted Drewes there, I don't know about it.

So, Mr. Meyer, consider this a request to come home and reinvent Busch Stadium's sorry food selection. Imagine Mike Mills setting up a smoker beyond the centerfield bleachers -- or, better yet, dueling barbecue stations, with 17th Street Bar & grill on one side, Pappy's Smokehouse on the other. Would Joe Edwards open a Blueberry Hill Express at Busch? I bet Danny Meyer could convince him.

At the very least, considering Meyer's reputation for treating customers well, that extra little cup of nacho "cheese" sauce would be complimentary.