Throwback of the House: Dinner Entertaining for Jerks 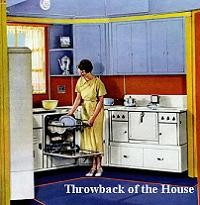 I hate the drop-in visit. If you ring my doorbell unannounced, you're going to be waiting awhile, because I'll be in the basement, willing the bell to short and give you a jolt.

I'm a lovely hostess. Really. Just let me know you're on the way so I can put on some pants, okay?

The 1970 edition of Betty Crocker's Dinner for Two Cookbook takes an even more jerkwad route on dealing with unwanted guests: Feed them dinner made from canned crap. If you can't be bothered to call before inviting yourself to dinner, don't expect me to waste fresh meat on you. You're getting Dried Beef Rarebit.

Sounds fancy, being British and all. But this is hardly a traditional rarebit. It lacks the bottle of beer simmered into the cheese sauce. This is plain old Shit on a Shingle with shredded cheese and dried beef.

Chop sheets of dried beef. Fry in butter. Add flour, paprika and dry mustard to make a roux. Add milk. Simmer. Add cheese. Throw it on some toast and give it to the lousy moochers. Betty suggests a side of canned Lima beans heated with canned mushrooms, and a salad of canned fruits in lettuce, dressed with sweet French dressing for dessert.

It's not bad. Not great, but it would be a decent meal for someone who's been hitting the sauce all day. Dried Beef Rarebit won't send your guests running for the door or the toilet. It's far more insidious: The sodium content of the dried beef is so high you might as well sweeten your guests' iced tea with desiccant packets.

I can't find the actual sodium content of a serving of dried beef. It's not listed on the label, which makes me wonder if dried beef is even a food product.

With the additional sodium from the rest of the canned foods, this meal will dry unwanted guests from the inside out, guaranteeing they'll stroke out before they get their freeloading, beef-filled asses back home. I can go back to watching reruns of The Golden Girls in my underwear in peace.