FoodWire: Net Some B-B-Q Tomorrow and Help Matthews-Dickey Bring Lacrosse To the City 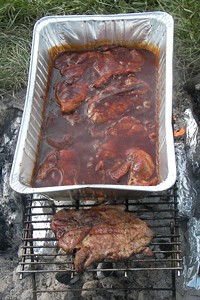 Nothing says a spring and sunny Saturday morning like a plate o' barbecue, right?

Tomorrow morning, beginning at 10 a.m., the parents of the boys' lacrosse team at Matthews-Dickey Boys' & Girls' Club will be showing off their 'que -- while supplies last.

A great cause, all the proceeds from tomorrow's fundraiser go toward the Bulldogs' third year of play. They are the only inner-city lax team in St. Louis; the hope is that someday the sport will be offered in the city schools.

DeSmet Jesuit grad and lax stud Paul Fusz started the Matthews-Dickey team a couple years ago. The boys play games on Sundays out in a suburban league near Creve Coeur Park.