One Saturday morning a couple of years ago, when I was living in Washington, D.C., for the summer, I stepped into Murky Coffee in Eastern Market looking for a new coffee to try. As I perused the tightly packed stout brown bags, something caught my eye. Written in neat typeface on the white label of one bag was the name "21 de Septiembre" -- the same cooperative where I'd conducted my thesis research in the spring of 2006. This was coffee from the same fields I'd walked just a year before!

I bought the bag, so excited by my connection with the tiny label that I didn't realize I'd accidentally grabbed decaf . Still, I couldn't help smelling the beans during my Metro ride home.

As we climb a steep hill outside the village of Campanario in Oaxaca, Mexico, Braulia López López shows me her coffee. The hills are full of undergrowth, and at first I can't see the coffee for the tree saplings. But soon the distinct deep green, waxy sheen of a coffee leaf stands out, and the pattern of the planting becomes apparent. What once was a tangled mess of green now looks like orderly latticework.

The plant's white flowers, subtly sweet-smelling, are in full bloom in anticipation of the coming crop. Despite the shade from the forest canopy above, the heat is becoming impossible for me to bear. Braulia treks onward. It's the spring of 2006, and she has invited me to live with her for the next month during my fieldwork.

Braulia is a stout woman with short curly black hair. Her voice conveys countless hardship. Her eyes, though, have the spark of a younger woman. She's a fast talker, opinionated, always with a story to tell. Her hands are small but strong, her fingers calloused from years of cooking on an open fire.

Her house is a simple concrete structure with a patio in front. Portraits of Che Guevara and Karl Marx frame the front door. Braulia is a committed communist; both she and her husband were very politically active when they were younger. I never asked where her husband was. Eventually, I heard he was killed in Mexico City on his way to a political rally.


Every morning, Braulia wakes up to start making breakfast for her daughter and me: fresh, handmade corn tortillas, rice, beans, queso fresco and the hottest salsa I've ever had. To drink, she serves café de holla, a sweet, cinnamon-flavored coffee. (Naturally, she grew the beans and roasted them herself). Braulia's daughter dutifully washes Braulia's taxi, covered in dust from the drive uphill from the nearby city, Putla de Guerrero. There is a certain pride in starting the day with a clean taxi, even if it does get dusty all over again on the way back down to the city below. Braulia is the only woman taxi driver I ever saw in Mexico. 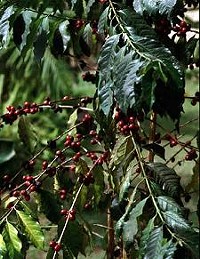 Braulia's coffee plot isn't large, but she still needs help maintaining it. Both her older sons are studying in Oaxaca de Juárez, the state capital, so she has to pay local workers to help harvest and maintain the plot. Coffee, especially organic, is a very labor-intensive crop. Since the cherries ripen at different levels across a single plant, each one must be picked individually to ensure a consistent, quality coffee. Workers plant "living walls" of ginger around the base of the coffee plants as a natural deterrent against weeds.
Because the coffee is organic, no pesticides can be used. Instead, small plastic bottles with holes cut in the side hang from the branches. Inside is a sweet solution of alcohol to lure coffee borers. Once they fall in, the insects drown. These borers were responsible for serious damage to local coffee production a few years ago.

For as much work as coffee is, Braulia doesn't do it for the money. Her husband was the one who started farming coffee. After he died, she continued to grow it. The year before, Braulia made around $2,000 pesos (roughly U.S. $200) for her coffee. Her coffee is fair trade and organic, which gets her the highest base price for her beans. After paying workers to help harvest the crop and fees to the cooperative for processing the beans, however, she was left with U.S. $20 for the year's efforts.

"I would starve if I tried to live on coffee alone," she tells me one morning.

None of Braulia's three children want to continue farming coffee, and I'm not sure she wants them to, either. Her oldest son is studying law; the other is still in high school. Her daughter takes "computation" classes in the nearby city, learning computer literacy to work in office administration one day. Young people in the community who aren't in school are already going to the U.S. to work. The same was true of all the farmers I spoke with: None of their children are interested in farming.

The tiny kitchen of my D.C. basement apartment didn't have a coffee maker, but I did have a grinder and a small, single-cup plastic drip cone. Watching the caramel colored foam rise up as the hot water washed over the fresh grounds, I considered that my coffee might not be Braulia's after all. Before I left, she was talking about moving to Oaxaca de Juárez to be closer to her sons. (She was worried they were slacking off in school). Had she moved already? How many others have, too?

When I asked Braulia what she would do for a living in Oaxaca, she said, "I'll figure something out." She had been toying with the idea of becoming a street vendor. The thought of Braulia having to move into a cramped apartment in the city to sell tacos al pastor and quesadillas worried me. But how much longer could they afford to produce 21 de Septiembre coffee when, after all their work, they make only $20 a year?

Braulia was determined, though. When she lost her husband, she took up driving the family's taxi to make money, raised three children, oversaw her land and still managed to find room in her life to host me, a total stranger. Of course she could handle a taqueria!

I looked at the bag's white label again and ground enough for another cup.