Throwback of the House: The Cold War on Cheese

If we've learned anything from mid-century stereotypes, it's this: People drank a lot back then. Between the nuclear threat and being crammed into a girdle, you'd probably have a Pink Lady or four before making dinner for your family, too.

If you're going to drink, you're going to eat dip. Chop a bunch of green olives from Dad's martini stash. Smash them into a 3 oz. Kraft Garlic Cheese Roll. Unless it's 2009 -- a year after the demise of the cheese roll, then substitute softened Velveeta.

Mix with sour cream, lemon juice, some Tabasco, a healthy dose of MSG and you've got a mighty fine dip for cocktail hour. Unless all that gin from the Pink Ladies causes you to confuse the refrigerator with the freezer and your dip becomes a dairy-based ice brick.

Screw it. Tell 'em you did it on purpose and you've got the makings for the Nippy Cheese Freeze Salad, which appeared in the 1956 edition of The Cheese Cookbook from the Culinary Institute of America. 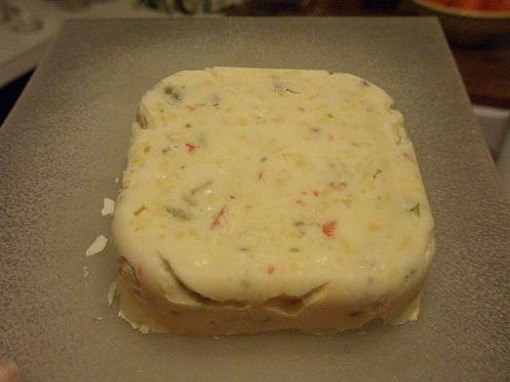 The dip's frozen? No problem! You're a resourceful housewife, right? Chop that cheeseish block into cubes (or shards, because the ice crystals cause all that dairy product to shatter in the presence of a knife). Throw it on some lettuce. Toss it with French dressing.

The French dressing is a trouble-maker, as the book doesn't specify whether it's traditional French dressing (a vinaigrette) or that red stuff Kraft started making in the '30s. It's probably the latter. If you don't have any on-hand, it means you're a bad mother. Make the 1939 version, because you're in no condition to drive to the market for the good stuff.

With any luck, your family will be so soused from cocktail hour that by dinnertime, they won't notice the frozen pain in their back teeth from gnawing on dairy products with all the texture of frozen Styrofoam. If the combination of roughage and abused dairy products destroys their digestive tracts the next morning, they'll blame it on the gin.