It has a bitter, face-contorting flavor -- with a violent after-taste. You might, like me, drool on your sleeve, thanks to your gag reflex. But at least you won't be hungover, promises Fix Strips.

Fix Strips are dissolvable papery strips that claim to peel away the fatigue of a hangover with a shot of energy: 22 mg of caffeine, 12 mg of guarana. The intent, I imagine, is to make Joe Sixpack feel buoyant long enough for the effects of the hangover to be less noticeable than typical. And anything to remove the regret associated with a hangover caused by a long night of binge drinking is right by me. But my first impression is strong: these things reek of bar- culture douchebaggery. Let's see if I can be proved wrong.

Two cartons of this foul-tasting product arrived at the RFT a few days ago, and since I noticed them on a Friday night on my way out, what better time to test out the product? I promptly got started. The aftermath is as follows:

The slick packaging looks like a carton of cigarettes and the smaller packages inside look like -- you guessed it -- cigarette packs. Perfect to put on display in bars, unless the bar you attend bans cigarette smoking. The packaging has an "extreme" feel and its slick corporate logo is a bit off-putting. But, on to the drinking.

1. As I peeled away the cellophane wrapper of an individual "pack" of Fix Strips, I found a small "cassette" inside, filled with brownish-gray strips that upon first inspection look like Carl Buddig ham left in the summer sun. And they exude that funky, rotten odor you whiff when drinking a Red Bull. 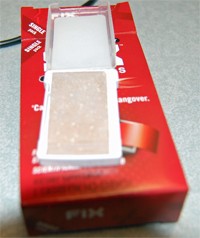 2. The cassette takes about five minutes to open. I can only imagine others' frustration while trying to pry open a tiny plastic cartridge with your fingernails at 8 a.m., all while suffering the affects of mental thunderstorm. Terrible idea.

3. The instructions to take Fix Strips: "Put 4 strips between cheek and gum to dissolve before ingestion, the morning after drinking. Be sure to drink at least 12-18 oz. of water. Do not take more than 8 strips in a 24-hour period."  The medical-sounding directions of these strips alarms me, but I probably should have thought about that before drinking the worm last night.

4. It's an hour later, and I feel jittery, like I've taken five cups of trucker coffee. I guess it worked, but is it wrong for me to feel like a alcoholic for keeping "hangover strips," in a cigarette-shaped carton, with me at all times?

5. The box states that users should store these strips in a "cool, dry area." But why?

More warnings that throw me off:

"These statements have not been evaluated by the Food & Drug Administration."

"Not recommended for children, pregnant women or persons sensitive to caffeine." Maybe these things more similar to cigarettes that just the packaging.

The box of Fix Strips promotes that it includes "zero calories, zero fat and zero carbs." This ad means nothing to me -- in fact it's kind of an insult to me as a consumer. Does HealthSport, Inc. and Innozen Inc., the manufacturers, really think I care about side-affects of hangover cures, just after I've drank enough alcohol to be hungover? Just give me the good stuff, doctor. Don't complicate things.

However, if you're battling a cold or think you may be, Fix Strips includes a whopping 192 percent of your daily recommended value of Vitamin C and 100 percent of B12.

It's an interesting product, and when one's faced with a hangover from hell, any remedy is better than nothing. But I think there are better fixes than the Fix out there.