In Soo: A Postscript

As Ian posted Wednesday, In Soo has been turned over to new owners.

For locals of a certain vintage, In Soo -- formerly known as Shu Feng -- was the quintessential Chinese eat spot in St. Louis. This was, in part, due to sheer demographics. When I was a young lad, there weren't many Chinese restaurants in town. (Weren't many ethnic restaurants, period.) My family went to Lee's, and, later, to Yen Ching, when Szechuan made its way to the Midwest. Keep in mind, there was no Olive Boulevard "Restaurant Row," no ersatz Chinatown. What had passed for a St. Louis Chinatown was torn down in the mid-1960s and replaced by Busch Memorial Stadium.

St. Louisans had no dim sum, no roast duck emporia. No Vietnamese joints, no Thai. (We did have chop suey houses, though!) There was a Japanese restaurant or two -- I remember one, which I believe was called the Mikado and was located on the bottom floor of one of those high-rise apartment buildings on Skinker overlooking Forest Park. (When Nobu's appeared in a former Steak 'n Egg Kitchen on Delmar past Old Bonhomme in the early 1980s, it was a revelation.)
The original Shu Feng came along when I was in college. By then the turnip truck I'd fallen off was miles back. If I hadn't been to the Far East (and I hadn't), I'd been as far east as New York, and I had at least an inkling of the potential of Chinese cuisine. Still Shu Feng, which wasn't Chinese or even Chinese-American but more like Chinese-Korean-American, was an eye opener. The hot-and-sour soup cut through a hangover like a sandblaster. The potstickers were house-made, from the garlicky filling to the noodles that filling was wrapped in; the dipping sauce served in a little dish alongside was soy and vinegar and then some -- the then some being chile and tiny rings of scallion. The string beans were "dry cooked" -- stir-fried without a lick of liquid till they shriveled, tasting of garlic, pepper, and the sparse sprinkling of ground meat (beef? pork?) the chef had blessed them with. Like the potstickers, the mu shu dishes were entirely made from scratch, and when you ordered one the components would be wheeled out on a tray and the wraps assembled tableside.

And when you came in for dinner, In Soo hugged you. She asked after your family.

She wasn't one to give out freebies. If she knew you, she might bring you a dish of kimchee -- her version wasn't made of cabbage but of some coarsely chunked raw root vegetable (turnip?).

I left St. Louis in the mid-Eighties, but Shu Feng (and later In Soo) would find its way onto the itinerary when I came home to visit -- a couple of trips to the hinterlands when Shu Feng relocated to Chesterfield for a time, a couple more when the restaurant returned to its Olive roots under its new moniker (having sold the Shu Feng name to restaurateurs three storefronts down!).

And after my wife and I moved with our kids to St. Louis in 2003, returning to In Soo was like coming home. My dad loved the place, and loved In Soo herself; the restaurant remained one of his favorites even as Alzheimer's erased his memories of it.

As I said, In Soo wasn't much for freebies. But I'll sum up with this little anecdote, which embodies her generous, cantankerous soul: 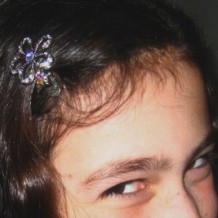 In Soo took a liking to my daughter, Annabel, who was five when we moved here. After we'd been in a couple of times, she presented Annabel with a barrette. The gift, though, was accompanied by a sternly delivered requirement: Whenever she came to eat at the restaurant, Annabel must remember to wear the barrette.

We forgot, but only once. And not Annabel's fault! But boy did we hear about it.

Unaware that the restaurant had changed hands, my sister and I took Annabel and her brother Jacob to eat there last weekend. Annabel, of course, wore the barrette. But In Soo wasn't there. Gone too was the bulletin board that had graced the entryway, filled with photos of regulars dating back decades. We hadn't been in to eat in months, and clearly things had changed.