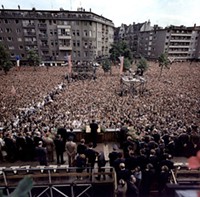 John F. Kennedy was not a jelly doughnut.

That seems to be the consensus about Kennedy's famous "Ich bin ein Berliner" speech (pictured right). Countless high-school German students like yours truly have chuckled at the notion that by saying "Ich bin ein Berliner," the president was stating, literally, "I am a jelly doughnut." That's because a) there is a jelly doughnut in Germany called a Berliner and b) an actual resident of Berlin would say, "Ich bin Berliner."

Not so fast. From the urban legends files of About.com:

Linguist Jürgen Eichhoff laid decades of misinformation to rest with a concise grammatical analysis of Kennedy's statement in the academic journal Monatshefte in 1993. "'Ich bin ein Berliner' is not only correct," Eichhoff wrote, "but the one and only correct way of expressing in German what the President intended to say."

An actual Berliner would say, in proper German, "Ich bin Berliner." But that wouldn't have been the correct phrase for Kennedy to use. The indefinite article "ein" is required, Eichhoff explains, to express a metaphorical identification between subject and predicate. Otherwise, the speaker could be taken to say he is literally a citizen of Berlin.

So what did Kennedy like to eat? According to his presidential library, he had fairly straightforward tastes:


We can not verify that this was President John F. Kennedy's favorite breakfast, but he did prefer orange juice, poached eggs on toast, crisp broiled bacon, marmalade, milk and coffee. For lunch, President Kennedy was particularly fond of soup--New England Fish Chowder was a favorite. He has been described as a "soup, sandwich and fruit" man for lunch--always soup though. For dinner there were no particular favorites, although he did like lamb chops, steak, baked chicken and turkey (white meat) and don't forget mashed potatoes. He also was fond of seafood and baked beans. According to chefs who worked in the White House, President Kennedy liked corn muffins too---so did Calvin Coolidge. For dessert, if he had it, it would likely be chocolate. President Kennedy was a small eater; he often had to be reminded that it was dinner time... politics always took preference over food.