A Visit to Cardwell's at the Plaza

At any rate, I dug the French onion soup at BC's Kitchen: "Its broth possesses a depth of flavor -- beefy, with an edge of malty sweetness -- that surpasses paler versions." The soup at the Plaza didn't have the same richness; the flavor of roasted onion was more simplistic. Still, this was a very good soup and, like its cousin at BC's Kitchen, far better than run-of-the-mill French onion soup.

But, really, this "experiment" was an excuse to try the famous "Meister Burger" again. 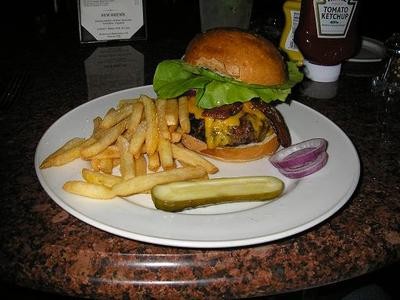 How did it measure up? Find out after the jump.

As I wrote in this week's review, this "is one of the best burgers in town, the thick, juicy patty topped with cheddar and blue cheeses, applewood-smoked bacon and, its signature touch, a spicy-sweet tomato relish exactly 37.6 times better than ordinary ketchup."

I'm happy to report that Cardwell's at the Plaza turns out an excellent -- maybe even superior -- version of this burger. The beef -- a perfect medium-rare -- was even jucier, and  the amount of cheese atop the patty was downright indulgent. And, as an added bonus, I didn't have to drive 90 minutes round-trip to enjoy it.

I should also mention, since it's been doom-and-gloom around Gut Check lately, that Cardwell's was doing a very brisk lunch business. This was the first time that I can remember where I was asked whether I had a reservation for lunch.