The Dish: A Cheese-Rite Sandwich at Maid-Rite

Occasionally, when I tell someone I lived in Iowa for a couple of years, I'm asked my opinion of Maid-Rite. "Don't have one," I say. "Never ate there."

The reaction is similar, I imagine, to what would happen if you told someone you were from St. Louis, and they asked your opinion on T-ravs, and you claimed never to have eaten one. The Maid-Rite loose-meat sandwich is an Iowan thing, like the smell of hog shit or the cow sculpted out of butter at the state fair (a.k.a. "The Butter Cow"). The original Maid-Rite diner dates back to the 1920s; it is now a chain of franchise restaurants based in Des Moines, Iowa.

I have no idea why I didn't try a Maid-Rite loose-meat sandwich while I lived in Iowa. It certainly wasn't because I was a snob. I was a poor grad student: I cooked ramen noodles for lunch and dinner; for a snack, I ate the noodles dry. The easy answer is that there wasn't a Maid-Rite near Iowa City, where I lived -- though a Google search turns up a location in Coralville, the next town over.

At any rate, when I heard that Maid-Rite had opened a location in Ferguson (260 South Florissant Road), I realized I had to go. I dropped by today and ordered the Cheese-Rite, $7.09 with fries and a soft drink. Below, what it looked like when it arrived at my table.

When it's open? Find out after the jump... 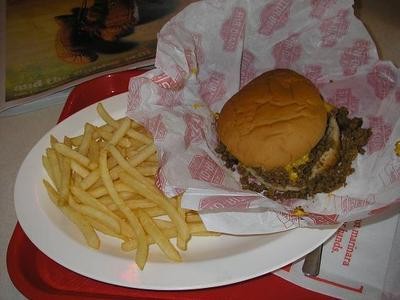 For those who have never eaten one, a loose-meat sandwich is self-explanatory: ground beef crumbled into very small pieces rather than formed into a patty. The beef (in this case topped with cheese) is served on a bun, which can contain maybe half of the beef; the rest spills out. I was given a spoon to scoop up the rest.

The flavor probably involves a special Maid-Rite "Top Secret" seasoning but is mostly salt and overcooked (though not burnt) ground beef. Maybe if you prefer your burgers well-done, you'll enjoy this. I didn't. The dry texture was especially off-putting.

I'm sure a devoted Maid-Rite fan would tell me that, like Guinness, the sandwiches are better closer to the source. I concede that this might be true. Though I'd bet it's more like the stink of pig crap: No matter how bad it is, eventually, you get used to it.