Cooking for Your Cat: Kitty Breakfast 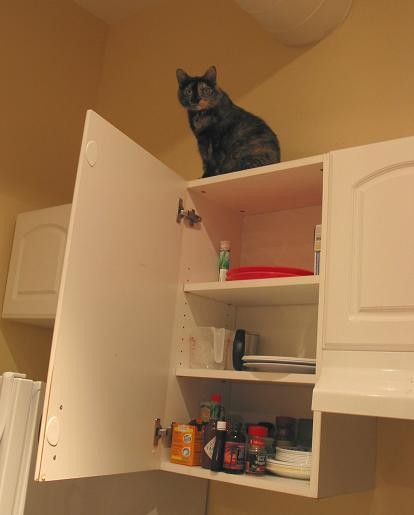 A few mornings after Sardine Heaven (For Cats) had been unceremoniously disposed of in the back alley, I awoke to a patented Bess dermatological treatment: thorough exfoliation by her rough little tongue, followed by a facial massage with her front paws. No one has ever complimented me on my glowing complexion, but if they do, I will give all the credit to Bess, who is a firm believer in personal hygiene and spends many of her waking hours on her own meticulous grooming routine, to spectacular effect.

Sometimes a Bess facial is an act of love. Sometimes it is an act of aggression. This one, I judged, was not retribution for the Sardine Heaven debacle, but a way to get me to stop pressing the snooze button. Still, as my brain unfogged, the guilt came flooding back.

"I never should have fed you anything I wouldn't eat myself," I had told her remorsefully as I scraped the remains of Sardine Heaven into the trash.

Round Two, after the jump...

(This was, of course, ignoring the nine years of kibbles, but we had agreed to let bygones be bygones.)

Unlike some of my RFT colleagues, I do not have an adventurous palate. I returned to the well of cat cuisine with a much more discerning eye and discovered something billed as Kitty Breakfast, but which bore a suspicious resemblance to scrambled eggs.

"Are you ready to broaden your culinary horizons, sweetheart?" I asked her now. Bess licked my face twice, gently, which I took for confirmation.

What with one thing and another (like work and nap schedules), we did not actually get into the kitchen until approximately eight o'clock that night. The recipe was simple enough: eggs, milk, butter and an unspecified cheese.

From time to time, Bess and I remember to be cheese connoisseurs. She is partial to the sauce on Kraft Macaroni & Cheese, though she has also been known to take a few nibbles of the gouda I sometimes bring home from Whole Foods when I am feeling expansive. Alas, I had neither on hand, though a few other members of the Kraft family were represented in our cheese drawer: Mexican Blend, Parmesan and American Singles. I laid all three on the kitchen floor and urged Bess to choose.

Immediately, she nosed the canister of Parmesan. "Excellent choice!" I said. Bess favored me with a scornful glance from her incomparable green eyes and sauntered away.

She was far less interested in the preparations of her meal this time around. At one point, she even left the room to go sit on her favorite windowsill. I had to call her back into the kitchen when dinner was ready. 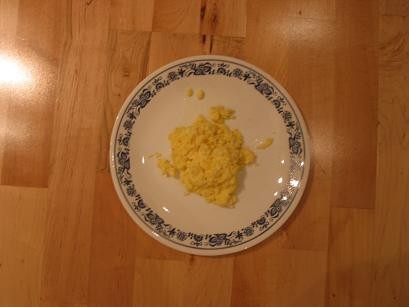 I thought the Kitty Breakfast was pretty good. The Parmesan, especially, was an inspired touch: its salty flavor contrasted nicely with the blandness of the eggs. But Bess hung back. Had all my lectures about the fine distinctions between people food and Bess food actually sunk in?

"You've got to try this!" I enthused.

Tentatively, Bess approached the plate of eggs and took a delicate bite. She licked her chops, but after the Sardine Heaven debacle, I had begun to suspect that this was not necessarily a sign of satisfaction, but merely a way to get the food out of her mouth.

I retreated to another corner of the apartment so she could eat in privacy. A few hours later, I heard the telltale jingle of her ID tag against the edge of the bowl. Was she eating? I hurried over to investigate. It looked like she had taken a tiny nibble. The sight of that tiny bit of missing egg filled me with unspeakable delight. I cut up the remaining eggs into bite-sized pieces and left her to it.

The next morning, the eggs appeared untouched. And there was Bess, resolutely diving back into her kibbles. I wished she had let me know sooner. Those eggs were pretty darned tasty.