Although the menacing weather appeared as tough as British celebrity chef Gordon Ramsay, Machamer hardly noticed. She effortlessly fluttered from room to room with a glowing tan and never-ending smile, energized to finally emerge from the contract-bound cocoon.

Since March, this very location has served as Machamer's hideout, where the recent The Culinary Institute of America graduate humbly worked as a line cook at Revival, awaiting the day she could fly off to Los Angeles and begin her new life as an executive chef at Gordon Ramsay's The London West Hollywood.

Last night, the wait was over. After a beautiful three-course feast made up of her Hell's Kitchen menu (photo of menu items)and specialty cocktails named after the show's contestants (photo of menu, including "Jen & Juice"), the sun peaked out from dark clouds, and everybody geared up to celebrate. And when Machamer made it through that door instead of rival and catering chef Louis Petrozza, the party was on.

Somewhere in between a glass of red wine and a glass of champagne, the season four winner sat down to tell us a bit more.

Kozlowski: So, you've been working at Revival, and kind of keeping everything hush-hush?

Machamer: Right. It's my secret alter ego, my Clark Kent, if you will.

Were you in contact with Gordon Ramsay during this time? Were you, like, getting off work and calling him up?

It was weird for me because I would work here Wednesday through Saturday. And then the other days, I was doing publicity and flying all over the country. So, it was really weird for me because I do all this fluff work and then I come here, and I work with my mentor [Cary McDowell, owner of Revival]. And so I feel like I'm paying my dues, and then I get to go take pictures and sign autographs and smile a lot. It's very creepy. And my co-workers think it's just as creepy because I'm also that girl who works the line--I'm not C. Mac, celebutant. 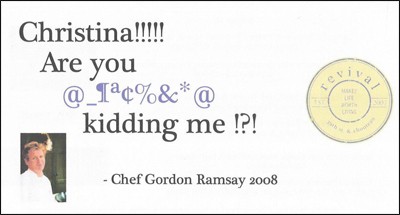 Does that mean we're not going to see you out in LA hanging with Paris Hilton?

I have to get a small dog and big glasses. I have a big dog and small glasses. So, I think I'm a little confused.

I'm guessing you'd probably do this all over again?

In a heartbeat, absolutely, I'd go right back. Even if it hadn't worked out, it was still a great experience.

What did it feel like standing at that door?

Scary as shit. No, it's four in the morning, so you really want to get the hell out of there, so you don't really care if the door opens or not.

Four in the morning?

Oh yeah. We were sleeping right before that.

What's it like to have Gordon Ramsay yell in your face?

Awesome. Um, having Gordon yell in your face is really, really hard. It's not the worst thing I've been through, but for me, this was so emotional. This was my culinary career, something I had worked for, all put on the line in front of a national audience. It's not like I was Bobby, the executive chef. No, I was Christina, culinary student with no career. So, if Gordon would have said, ''You can't cook!,'' now I'm that girl from that show who can't cook. That was especially stressful.

Have you been watching every week? What are some of the thoughts that go through your head as you've been tuning in?

I have been watching every week. The biggest one is ''boy isn't this boring.'' There's only certain parts that you see, and there's so many relationships, so many things that happen on the show that were maybe important to me but not necessarily important to the plot line. And so I learned how to do a blog on this thing called MySpace that I hear people do. I started talking about things that happen that no one sees. [Check out her MySpace page and blog.]

Did you feel like anyone was misrepresented on the show?

I don't know if anyone was misrepresented. I think we all fell into our type-casted categories. Where Jen definitely played the role as the villain and Petrozza was definitely the nice guy and I was definitely the young, naive girl. In some respects those are true, but those impressions only go so far. There's a whole different realm to everyone's character.

He's hilarious. First of all, Gordon loves Diesel jeans and wishes he could wear more suits. He's very label-whorish with a snappy wit. He should be on The View, but he curses too much. Being around Gordon was definitely great. He's not afraid of anybody -- not a single fucking person. In a scrap, I'd rather have him on my side. Being around that sort of that influence, with that much measurable success, he can really stand his own and definitely gets you to grow a pair of bollocks.

Did you have fun in Dubai?

I had fun in Dubai, but my advice to anyone who wants to go there -- wait and go in five years. It's all under construction. His restaurant is definitely the best restaurant in Dubai, and I'm not just saying that because I work for him. Seriously, the food out there is not good. And it's expensive. And it's a Muslim country, so liquor is expensive. I didn't have to wear a burka, but you have to wear scarves. You feel weird walking around in a sleeveless shirt even if it is 105 degrees. But it's such a status symbol. It's cool to wear the burka, and you almost feel like you don't fit because you don't have it on. The women really look down at you for not having it on. It's like Manolo Blahniks here -- they're their own sort of burka.

Do you still talk to anyone from the show?

A couple of people...Petrozza actually e-mailed me today. I talk to Corey a little bit; I talk to Vanessa a lot. That's my home girl. I was really upset when she quit because she was, like, my only friend there. She is so talented and so down to Earth, and I wish she had stayed longer so we could have had like a Corey-Christina-Vanessa triad.

If you could open up a restaurant in St. Louis, where would it be and what type of food would you serve?

What if you *had* to open one up here?

Honestly, the political and economical climate right now is not ready for what I want to do. If I was going to open a restaurant in the St. Louis area, it would be in Augusta. Most definitely. We have a farm out there. I love the wineries; I love the simple way of life. It would be open Wednesday through Sunday. We would cook whatever we would be growing; there would be five items on the menu. It wouldn't necessarily be expensive, but a girl's got to eat. It's not the climate for people to be driving that far, but I think it's the most beautiful area here. If I could, I would raise and grow my own chickens, my own flowers my own. I'm not a fucking granola, Kumbaya girl, but there's something to be said about that.

When do you head out to LA?

I don't know, but I'm going to New York tomorrow. Like, seriously, that's the wrong side; I'm going farther away. I'm going to be doing some cooking for a guy name Regis Philbin [on Live with Regis and Kelly]. As for LA, my bags are packed, my furniture is sold -- I'm ready.