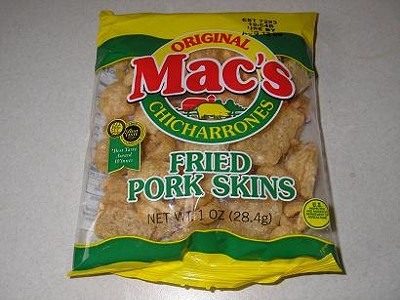 The Location: The RFT break room

The verdict after the jump...

The Verdict: I'd never noticed the fried pork skins in our office vending machine until a colleague pointed them out to me -- enthusiastically. These were the barbecue variety of Mac's chicharrones, and they were tasty. Crisp. Salty. Porky. Spicy. Smoky. A fine snack.

When the vending machine was stocked last week, the barbecue chicharrones were replaced by Mac's Original Chicharrones. No hiding the pure porky awesomeness behind a scrim of barbecue flavor. This was the real deal. Or so I hoped.

Unfortunately, that barbecue flavor was hiding the fact that these chicharrones taste like burnt bacon. The aftertaste is acrid. Still porcine enough to pass my most basic, snack-desperate muster, but not something I'd want to try again.

And it should go without saying that neither variety of Mac's Chicharrones provides the sublime pleasure of freshly fried chicharrones, crisp, crackling and tongue-strippingly hot.

I think I'll be paying a visit to the chicharrones stand at Soulard Market this weekend.