On Thursday night, Stable opened its doors for the media, serving a few free glasses of its micro-brewed beers to the press - a dead-on way to get the reporters to an event - for its media night.

The restaurant, micro-brewery and micro-distillery is housed in a mammoth brick building at the corner of Cherokee and Lemp streets in the Benton Park neighborhood.

The estimated $1 million renovation of the former horse stables for the Lemp Brewery (closed in 1922) took more than a year, and more additions are planned for 2008, says one of its owners, Jesse Jones.

Our photo slide show gives a first look at Stable, which has a soft opening tonight and a grand opening on Saturday night. 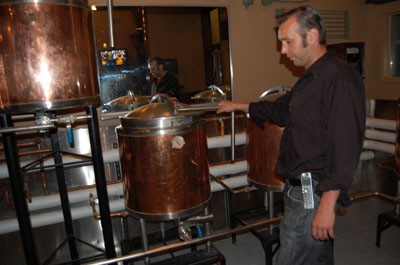 Jones is part owner of the Amalgamated Brewing Co., which also operates the Rotten Apple, a bar and restaurant in the Illinois river town of Grafton.

Look for a review of the grand opening on Sunday.