The Next Chapter of the Red Saga: Beso Mexican Restaurant 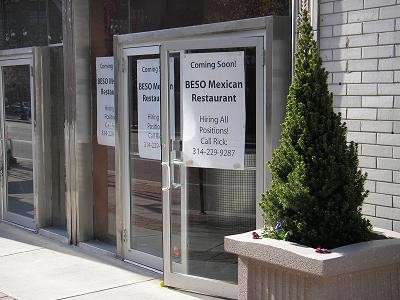 Shuttered Loft District restaurant Red will become Beso Mexican Restaurant. It doesn't look like much work has been undertaken as of yet. More details as I learn them. If you need to catch up on the Red saga, links to previous chapters after the jump.

Red opened in September of last year. My review was mixed. I thought Rene Cruz's cooking showed a lot of talent, but the Eastern European concept was limiting him, and Red's overall ambience was more club than restaurant.

In March, my colleague Kristen Hinman reported on a feud between Red owners Derek Onstott and Kirk Apazeller:

During a recent interview Onstott displays an operating agreement for Red's LLC, Contemporary Foods, which identifies him as majority owner, with an 80 percent stake. Onstott says he sunk $720,000 into starting Red and that he offered Apazeller a 20 percent share without any money down. Onstott claims he obtained his cash after selling an auto business in his native Belleville.

...In a separate conversation, Apazeller acknowledges Onstott's investment but says the promissory note amounted to $325,000 and that only $125,000 has been deposited into Red's account. Apazeller says he put in $10,000 and shows documents indicating he incorporated Contemporary Foods as the sole member. He offers up the restaurant lease, executed with Contemporary Foods and signed by him, as well as the liquor license, which he acquired. "We don't believe Derek's [document] is a true operating agreement," sums up Apazeller's attorney, Jeff Witt. "All of Derek's paperwork is at issue."

At the time Hinman's article was published, Red remained open. However, I reported the following week that Red had closed -- apparently for good.