What Is Suadero? (Besides Tasty, That Is) 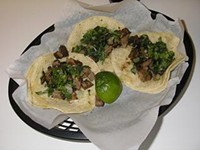 While waiting for lunch at La Vallesana a few days ago, I noticed a meat on the taqueria's menu that I'd never seen before: suadero. I don't speak Spanish, but sometimes I can figure out unfamiliar words through the other languages I've studied or English cognates or just sheer dumb luck. In this case, though, I was stumped.

Turns out, I'm not alone. It took me a fair amount of sleuthing to figure out what suadero is -- and even now I'm not 100% sure.

There is a brief entry on Wikipedia:

Suadero, in Mexican cuisine, is a thin cut of beef from the meat that hangs from the breast bone on a cow. Suadero is noted for having a smooth texture rather than a muscle grain. Typically, suadero is grilled and used as a taco filling. When cooked right, it's really, really good.

I had trouble making much sense of this description. And that last sentence doesn't really add much to the entry's authority. I found other mentions of suadero on various sites and message boards, none of which cleared up the confusion. Some claimed it was rib meat, others that it came from the front of the cow. Some compared its texture to carne asada; others said it was smooth.

The Web site on which I found this chart describes suadero as "the intermediate part between the belly and the leg." (It's the part immediately above the udder on the chart above.)

With this (only slightly) better idea of what, exactly, suadero is, I returned to La Vallesana and ordered three suadero tacos. As per usual, these came topped with diced onion and cilantro on two corn tortillas. (They are pictured at the top of this entry.)

The meat looked like chopped steak. Several of the small pieces had some kind of sinew or connective tissue visible, but this wasn't unpleasant to eat. Overall, the texture struck me as chewy, though not overwhelmingly so. Like hanger steak, I guess. The most notable aspect of the texture was how the surface of many pieces had browned and crisped. Very similar to carnitas.

The flavor was, well, beefy. Nothing especially new or remarkable. Just tasty. Suadero won't replace al pastor as my preferred taco filling, but for a change of pace they were quite good.