How Can Something Called Beer Chips Not Be Awesome? 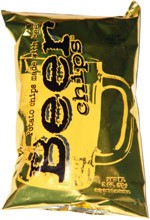 So I walk into the Whole Foods in Brentwood one day last week, and just inside the front door is a giant display of Beer Chips. These, as you might guess, are potato chips made with beer. Being a curious sort, I bought a bag.

Beer Chips, the snack food, are your basic kettle-cooked potato chip: medium-thick, with quite a crunch. Beer is the fifth ingredient listed, after potatoes (duh), oil, sugar and maltodextrin, but before salt, honey and yeast extract. What specific beer, if any, they use isn't listed.

I found the beer flavor mild -- almost unobtrusive. I mean, it's definitely there, but what I noticed more was the chip's sweetness. They aren't tooth-achingly sweet, but I found them as sweet as they are salty. Maybe more so. Overall, I'd say these chips aren't bad, but they wouldn't be my first choice.

My wife, on the other hand, tried a few and described the experience thus: "You know how when you drink too much beer, and then you wake up the next morning and your whole mouth tastes like gross stale beer? That's what these taste like."