Who would've guessed that we'd spend the final episode of a rather brief season (was it ten episodes total?) about an hour outside LA in Moorpark, California? 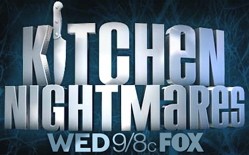 Throughout these recaps it's been obvious that Gordon Ramsay actually only set foot in three states -- New York, New Jersey and California -- and hovered near America's two major cities. Week in and week out we watched: the same oblivious restaurateurs + the usual problems + Ramsay's in-your-face attitude + a super-efficient design team + FOX's cheesy music/editing. Sadly, as we have witnessed, this equation doesn't equal reality-TV gold. I'm not even quite sure what it adds up to at this point -- aside from something I will delete immediately from my TIVO after I'm finished writing this.

DAY ONE French chef-owner Michel Bardavid has really done it this time, though. As we can tell from FOX's endless previews, he's got Ramsay's veins nearly popping right through his neck before the show begins. Michel's Secret Garden opened in April 2000, and from what we can tell, hasn't had a customer base since. His secret? To crust and stuff the living hell out of every item on the menu.

This is all too apparent when Ramsay is served the "one worst meal" he's ever eaten: • The drinking glass: dirty! • The crab: canned! • The frown-worthy mixture of strawberries and shrimp: disgusting, cold and undercooked! (I believe he only took one bite of the appetizer.) • The steak: "tough as boots!" • The potatoes: "big ball of grease!"

When chef Michel snidely remarks, "The customer is almost always right," we no longer need sous chef Devon to tell us "he's got an ego the size of France." But you gotta love Ramsay because he'll cut down even the biggest arrogant turd: "Don't take this personally, but your food is crap." He also uses the words "tasteless" and "bizarre" to describe the Michel's culinary catastrophes.

It's only typical that Michel is $300,000 in debt. And then there's another beautiful line from Ramsay: "I'm trying to get inside your mind so I can get how stupid you are."

DAY TWO Dirty stoves, a moldy fridge -- we've seen this all before. Then there are the maggots on what looks to be a potato? To be honest, I can't tell what the thing is that makes Ramsay dash to the restroom to cough/barf. And we've seen that before, too. Yawn.

During dinner service, Ramsay spots a ridiculous appetizer that appears to be one slice of a strawberry on a plate. Moreover, Michel takes too long serving the few customers he draws, which are mostly a few blue hairs and the like. He expects his guests to want to spend two to three hours in his restaurant and says that's how the Europeans do it. Unfortunately, Ramsay discovers that Michel thinks this because he cannot prepare all his stuffed and crusted meals in a timely fashion.

DAY THREE Ramsay messes with Michel in the most brutal way: By boarding up the windows and hanging a "closed for business" sign. Chef Michel doesn't get upset -- he gets pissed. All he can think about are the people who drove by the Secret Garden that morning and saw it was out of business. What he doesn't realize is that nobody probably noticed -- or cared.

Gordon breaks out a special menu for tonight's dinner with roasted chicken, tuna niçoise and asparagus tart included. Server Jane noticed a change in customers' response to the new items. Yes, things are much different when people don't have to lie to you about how the food tastes.

Half way through dinner, disaster strikes. Ramsay realizes there is little to no communication from the front of the house to the kitchen. So, when menu items start selling out, the servers are still advertising those items as a special, when in reality they don't even have the ingredients for dish to prepare. Ramsay goes outside and exclaims to the camera, "This is the most disorganized restaurant in America tonight!" Michel takes out the disorganization on his workers, causing Jane to run out in to the street crying and another server is also in tears.

DAY FOUR Ramsay describes the ambience of Secret Garden Restaurant "like walking into a funeral parlor." It's overloaded with girly antiques such as frilly lace, teacups and tacky chandeliers. Much to Michel's chagrin, everybody works together to pack up the old junk and haul it away in a moving van.

At the reopening, another food critic drops by -- this one appearing old enough to drink -- along with Miss California and unexpected bus of 24 people from a local vineyard. The critic coughs and tells the waitress the tuna was "salty and over-seasoned." This statement validates Michel. He says, "That guy is not a chef!" about Ramsay. And then to Ramsay he says, "Your menu is not better than mine!"

A shouting match ensues. Of course Ramsay wins in the end, and the critic is served another special from Ramsay's menu. She now approves and says it's "perfect" and "beautiful."

FOX pretends like Michel follows Ramsay's advice for the next few weeks, and his restaurant flourishes. Yet, one quick Google search, and I find Michel's online menu showing no signs of Ramsay's additions. (Unfortunately, if you click on the hyperlink today it will say "bandwidth limit exceeded." Luckily, I saw all I needed to see last night.)

Lesson learned: FOX needs to take a cue from the BBC and stop ruining good shows.

"If I had to give advice to someone considering being on a reality show, I would tell them not to do it," he added. "The stress is not worth it."