Gut Check reads the leading food and beverage publications -- so you don't have to! 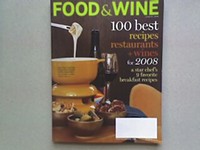 You're Right -- I Am Bored with Dubai The January issue of Food & Wine (not yet online in any form) lists its "100 Tastes to Try" in 2008, beginning with food- and wine-related travel.

Dubai might be the epitome of Middle East luxury, but Bahrain and Qatar are catching up. Other places to visit this year include the Beijing Olympics, the new Oxbow Public Market in Napa Valley and, um, Lawrence, Kansas.

Bonus points for the cool sidebar on food trucks.

Get Yer Mind out of the Gutter -- I Said Poutine And I quote: "If 2007 was the year of the meatball, 2008 is the year of the chicken liver." Fuck, yeah! Other hot foods for the new year: mackerel, homegrown microgreens, muesli -- seriously! -- the South Asian ice cream ice cream-like frozen dessert known as kulfi and the Quebecois specialty poutine.

What the Hell Is Poutine, Anyway? Glad you asked. "...[A] delectable combination of French fries, gravy and fresh cheese curds." I'll meet you in Montreal.

But Seriously 2008 Is the Year of Sustainable Seafood The magazine offers a list of six fish you can eat without guilt, a subject of much concern to us here at Gut Check. Or you could just visit Seafood Watch.

God Save Us from Locavore Cocktails In San Francisco, shockingly, with locally distilled alcohol, homemade mixers and locally grown fruit. Also, green (as in trying to help the environment) beer. Drink too much and your puke will sprout flowers. Other libations to try next year include barrel-aged beers and hand-pumped cask ales, the white wine varietal known as torrontés and small-batch mezcal.

Because Dubai Wasn't Enough of a Taunt We spend New Year's Day -- of 2007? or Food & Wine has a time machine, in which case I can think of approximately 10,432,252 things it would be better used for -- in Aspen with Ryan Hardy and Richard Betts, the chef and sommelier of the Montagna restaurant at the Little Nell Hotel.

Really, everything you need to know about the party is summed up in this sentence: "Seven-year-old Isabella [Betts] already has an appreciation for beets, Beethoven and baby sips of Burgundy."

Now You're Just Rubbing It In, Food & Wine Yes, it's an "Insider's Guide to Hawaii." Why do I often want to punch travel writers? Because while we shiver into another Midwest winter, they write ledes like, "Every time, I've been in Hawaii, I've felt like I was on the set of a faintly depressing film about the '70s." (Dude, I think you're thinking of that three-part episode of The Brady Bunch.)

Much great-sounding seafood is consumed, a bottle of pineapple wine is left half-empty, and a local family is condescendingly mocked for having pet goats. "Hawaii was starting to seem like a children's book written by someone who took a lot of drugs in the '60s."

Dude, now you're thinking of this: