Is it just me, or did this episode feel eerily similar to the first two? I know all Gordon Ramsay shows have a certain formula that's been proven successful, but this bad manager theme is becoming a tad redundant. Why can't the show just be about getting back to cooking basics and putting your nose to the grindstone? But, no. On FOX, some arrogant weirdo has to be involved to add a dramatic element that TV producers feel Americans crave.

Also, I thought Ramsay was going across America to find kitchen nightmares -- not within a 50-mile radius of Manhattan. Why can't he go to the middle of Ohio and re-launch a dingy roadside dinner; or at least set foot in one of the 49 other states. I'll keep my fingers crossed and pray for variety during the previews for next week.

This time, though, we're back in the New York town of Bellmore. Ten years ago when The Mixing Bowl opened, it was one of the few restaurants in the area. Since then, competition has spiked, and their drab eatery is easily lost in the shuffle. Owner and chef Billy and his wife, Lisa, feel like they've done everything to make it work. Lisa says her hope is gone. When we meet the pudgy manager some call "Mixing Bowl Mike," whose managerial douchebaggery fall somewhere between episode one's Peter and episode two's Martin, it's no wonder why hope has faded: There's another moron running the front of the business.

After this awkward scene, Ramsay eats his first meal at The Mixing Bowl. He orders Maryland lump crab cakes (which the menu lists as award-winning, but Mike, of course, doesn't know what award it won), zucchini pancakes with a chive sour cream and north Atlantic salmon. The verdict: The crab cakes are a "high point," the pancakes taste like "a mouthful of glue" and the salmon is just bland. "Very average, very dreary and very sad," Ramsay says.

We discover "Mixing Bowl Mike" gives away fifty-percent-off coupons to customers who walk in the door and spends extra cash on pointless signs that say stuff like "Now Accepting Reservations" and "Order Your Thanksgiving Dessert Early." Ramsay quips, "In case we're closed by November!"

Ramsay tells Billy he looks like "a man waiting to be put out of his misery" in the kitchen. A bit harsh, but that's what Ramsay does to get his point across.

DAY TWO The tacky signs get tossed into a wood chipper -- of course, Ramsay does the honors. It's all too much for Mike, who puts his hands over his eyes.

After showing the staff how much Bellmore has changed in the past decade -- with 41 new places to eat -- Ramsay suggests to reposition The Mixing Bowl as the healthy, high-quality alternative. It's really the only thing missing on their street.

When Chef Ramsay asks Billy to cook side-by-side with him to come up with new menu items, Billy couldn't be more honored. Ramsay cooks salmon poached in a vegetable stock topped with a walnut pesto; Billy's meal is seared salmon with a ginger balsamic drizzle. Impressed by Billy's cooking, Ramsay thinks both dishes are so good they could be added to the menu that night.

However, tonight's dinner service doesn't fare as well. A packed restaurant (due to Ramsay sightings around town) reveals the kind of problems Mike can create. He spends too long with customers -- gloating along as if he's the one who own the place. He brags, "I get very large tips ... I mean, 20, 25 percent!" Therefore he feels entitled to half of the tip jar at the end of the day, never minding that he might have only waited on one table while two or three other waitresses busted their asses to cover the rest.

And to the waitresses, Mike says: Do you think you'd be getting those tips if it wasn't for me?!

At this point, I'm truly speechless. How is this guy still employed ... anywhere ... doing anything?

DAY THREE Magically, like little worker elves who appear out of nowhere, a design team revamps the inside of The Mixing Bowl -- taking it from an "nondescript diner" to a "sleek, contemporary restaurant." And FOX's "elegant" use of a lens filter attempts to make the tablecloths and glassware glow as if God himself had just cleaned it. This jarring visual interruption made me think my contacts were drying out. At least the place isn't using paper tablecloths anymore. That's an inexcusable sin in fine dining.

All this proves too much for "Mixing Bowlhead" Mike. He begins to cry several times. And don't be fooled -- they're not even real tears. They are tears of an attention whore.

DAY FOUR Mike loses it during the re-launch. He books too many reservations at the same time, and then he forgets to reserve a table for the New York Dragons, the local celebrities Ramsay invited. He blames the poor waitress. Then he says: "This is our one shot to make a lasting impression, and we're going to blow it." I think he means he's going to blow it. The wife/owner calls him a "freakin lunatic," and Ramsay suggests he be fired. 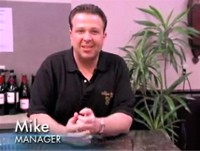 Unfortunately, Billy decides to keep the scumbag. Mike cries some more -- tears of happiness, I'm guessing. And then I'm crying, but it's only from frustration. Is Kitchen Nightmares going to get any more interesting than this? I just had higher hopes for this show.

With only a few minutes left, it flashes two months ahead and paints a joyful picture of a restaurant and its staff on the road to recovery. And they all lived happily ever after. Oh, and Mike cries one more time.

Lesson learned: If you do take reservations, be sure to not book more guests than seats available -- especially when those guests are brawny football players!

Next week: Another New York restaurant?? Another "dirtiest kitchen Gordon's ever seen"? I have to go lie down now; I'm having an extreme case of déjà vu.