I hope you were able to visit the Festival of Nations. Yesterday, especially, was a glorious day. I'll post a few photos and some impressions later. First, though, the news.

The latest on the Whole Foods-FTC battle: An appeals court rules that the merger can proceed. (Los Angeles Times)

You know the rise in food prices is a serious matter when the Economist weighs in. 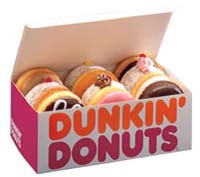 A site with a long domain name.

Dunkin' Donuts is going trans-fat free. Baskin-Robbins, too. Are you reading this, Annie? (Reuters)

Finally, Facebook groups persuade Cadbury to bring back a discontinued candy bar. The more important issue here: Why are British mass-market candy bars so much better than ours? (New York Times)