I visit many restaurants -- too many to cover in the print version of the RFT. From time to time I'll share my thoughts on these visits in briefer, less formal blog-exclusive reviews.

Sometimes I think there must be as many variations on pizza as there are people who eat it. The regional differences alone would probably take you a lifetime to catalog. You'd need twice as long to make headway on a complete list - and that's even if you discount such corporate bastardizations as stuffed-crust pizza. 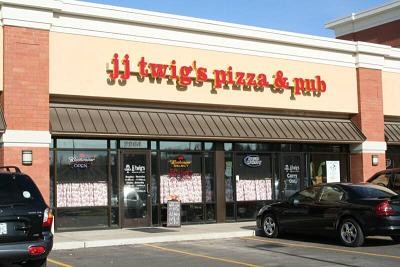 Now comes JJ Twig's Pizza & Pub, which opened a few months ago in a Valley Park strip mall. JJ Twig's (based on JJ Twig's in the Chicago suburbs) offers "double- decker" pizza: a thin crust topped with a little bit of sauce and then another thin crust and then the sauce, cheese and toppings. The two thin crusts fold together around the edge so that, when whole, the double-decker resembles a normal, thick-crust pizza.

It's less daunting than it might sound: thick but nothing like a deep-dish pizza. I tried the JJ Twig's Special, which comes with sausage, mushrooms, green peppers and onions. A 14-inch large costs $22.49 and is more than enough for two people; a 12-inch medium is $19.79.

The toppings were fine, though I would have preferred less onion and more sausage. The sauce and cheese were straightforward and tasty. As you might expect, a key to a pizza like this is the quality of the crust. JJ Twig's was soft and chewy. I don't know what the pizza really gains from having two "decks" instead of one thick crust -- the layer between the two was very thin --but I didn't mind eating so much crust.

JJ Twig's also offers standard (not St. Louis-style) thin-crust pizza as well as sandwiches and burgers. The sausage sandwich ($8.99) I tried featured excellent homemade salsiccia smothered in undistinguished marinara sauce; it was served on French bread that wasn't strong enough to hold together under all that sauce. I ate the salsiccia with my fork. The sandwich came with fries, which had a strange crunchy texture and very little flavor.

Appetizers included deep-fried white cheddar cheese curds ($5.29). These were no better or worse than your average deep-fried cheese sticks. Which is to say I ate more than I should have before my sandwich arrived. The catalog of fried cheese, unlike that of pizza, would be very short - but compulsively readable.