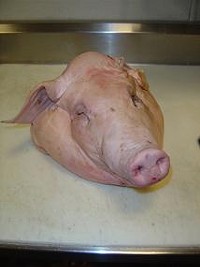 A Friday or so ago when I was craving a panino, I called a friend who shares my obsession with New York City's 'ino. This guy knows every St. Louis restaurant menu by heart - he would know exactly where to find a yummy lunch of goat cheese, mortadella and black olives between grilled bread.

Wouldn't that be nice...he said.

But how about pig's head? he suggested. There's a place on the Hill--

In a fit of gluttony we decided to meet at Stellina Pasta Cafe (3342 Watson Road), a wonderful south-city eatery featuring homemade pasta and grilled sandwiches that I'd call a close cousin of panini. I'd order several sandwiches there and my pal would smuggle in the pig's head sub from Gioia's Deli (1934 Macklind Avenue) on the Hill.

Not so ethical, I guess, but in the name of research? Why not.

Waiting for the Stellina plates, we hunkered over the table and tucked into that sub like Ph.D.s preparing to defend our dissertation. I could take or leave the lifeless Italian bread that's so beloved over on the Hill, but "The Hot Salami," as Gioia calls the meat, was warm and pillowy with a slight pickled flavor. The meaty juices dripped from the sandwich and sloshed all over the tin foil. Mmmm.

Tell me the truth, I said, is it really pig's head?

If they told you they would most certainly have to slaughter you, replied my friend.

A few days later I got Cathy Donley, Gioia's owner, on the line. She didn't want to 'fess up to any of the ingredients at first. "Other people [on the Hill] do have it but a lot of them cut it cold and microwave it," she said. "We're probably the only ones that boil it every morning. We take it out of the pot and serve it warm, though some times of the day it is hotter than others."

With a little more prodding, Donley owned up: "It's pork. It's slices of pork. Yes, it does have pig snout in it. The real name is Salame de Testa."

Gioia's - which Donley says is the longest-surviving business on the Hill - has been serving up the sandwich since 1918. Donley acquired the coveted recipe from Challie Gioia, the deli's original owner, when she bought the place in 1980.

"I was pregnant at the time and I didn't want no part of the sandwich, no part of it," Donley recalls. "I eat it now. Most of my help doesn't eat it 'til they try it and find out they like it."

The "Hot Salami" recipe, indeed a secret, calls for boiling both beef and pig snouts (which Donley gets from a distributor) with a slew of herbs, garlic and black pepper. Donley wouldn't disclose anything more.

Judging from a number of recipes for pig's head that I consulted on the Web, I'd imagine the meat goes into some kind of mold (or is boiled in a mold) and is then sliced.

Trolling around cyberspace, I also noticed that outsiders do know about St. Louis pig snoot sandwiches. (C&K Barbecue up in Jennings, I'd guess, is the best place to try one.)

But there's not much out there about local renditions of Italian-style pig's head salami. (This blog dedicated to offal looks like a great place for home cooks to begin experimenting.) No matter for Cathy Donley. Gioia's goes through 700 pounds of "Hot Salami" a week, compared to about 250 pounds when she bought the deli. "It's definitely our drawing card," she said.